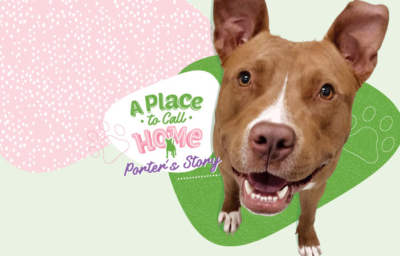 Two brown eyes peer through the window of a room just across the hall from the dog adoption floor at Animal Friends.

Porter, a young and affectionate dog patiently waits for a familiar face to come through the door and give him the companionship he so desperately craves.

Porter came to Animal Friends at just 5 months old. His owner had recently been charged with animal neglect of another dog, Pinky, who had been rescued several months earlier by our Humane Society Police Officers. After a judge had ruled that the owner was prohibited from having other pets, we learned that Porter was now living at the home. So, our Humane Investigations team stepped in to bring Porter to the safe haven of Animal Friends. 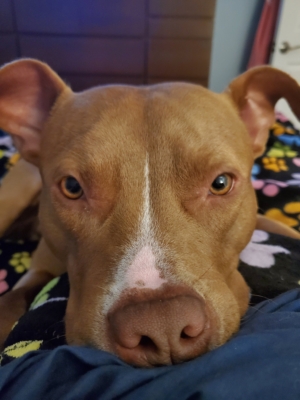 Porter spent time in several different foster homes over the following months, but struggled to find the right fit and eventually came back to Animal Friends to continue his training under the watchful eye of our Behavior staff and most experienced volunteers.

But as time went on, we began to notice some concerning behaviors. It was clear that Porter’s stress and anxiety were increasing significantly.

Despite the best efforts of his closest friends to help him feel safe and comfortable, Porter’s mental and emotional health were quickly declining.

During adolescence, dogs learn many of the critical social skills that are so important to their development. In most cases, dogs at this age find families very quickly after arriving at Animal Friends. But, since Porter was involved in an ongoing investigation, Pennsylvania law required him to remain in Animal Friends’ care pending the outcome of his case.

This meant that Porter would have to wait … and with each passing day, it was becoming more and more evident that time was not on his side.

Much of Porter’s stress was displayed when returning to his kennel. It was clear that he loved people and was friendly with visitors and while playing outside, socializing and exercising during his daily walks. But when the time came to go back to his kennel, it was as if a switch was flipped as panic, fear and anxiety would take over.

What started as Porter simply avoiding the walking route that led back to his kennel quickly escalated. He attempted to pull out of his collar and eventually began barking and growling at his handlers and even snapping at close friends – all behaviors that commonly result from a dog being forced into a situation that is scary or uncomfortable for them. 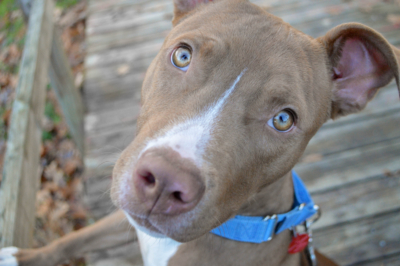 We knew that behind these alarming behaviors was a sweet and affectionate dog. And, we were determined to learn from what he was telling us and figure out how to ease his stress and build his confidence.

As his court case dragged on for months, our dedicated and experienced behavior team created a comprehensive behavior modification plan and explored every option to set Porter up for success in the shelter environment. While most animals benefit from consistency, Porter’s plan was centered around variety and a constantly changing routine.

Our Behavior team moved Porter from a traditional kennel into a larger room meant for multiple dogs to give him more space and a quieter, less stressful place to settle in. We began utilizing multiple handlers to switch roles during his walks and employed treats, toys and enrichment activities – even his daily meals as positive reinforcement techniques to encourage him to return to his room without causing him even more stress.

Porter was incredibly intelligent and was learning the routine just as quickly as we were. But, despite new challenges arising each day, Porter’s team wouldn’t give up on him. 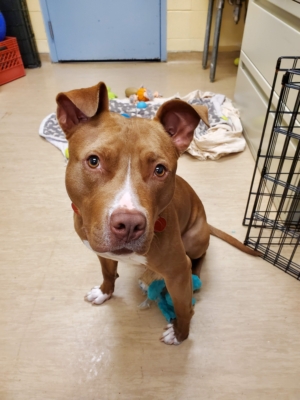 When his special room was no longer a comfortable space for him, our staff re-purposed the large Grooming Room which was located in a separate area of the building and had several windows, plenty of space and two doors for entering and exiting from different directions.

Through each phase of his plan, Porter seemed to be two steps ahead. As quickly as we could adjust his routine and start to make progress, he would start to revert to his old behaviors. We were growing concerned that we would eventually run out of options …

Finally, after months of waiting, his court case came to a close and Porter was officially released from his adoption hold which meant that his search for a permanent family could finally begin. Porter moved into a foster home with Veronica, our Canine Behavior Specialist and one of his closest friends so that we could see how he managed a transition into a home environment. We were thrilled as we watched his stress melt away as he settled into the comforts of a home away from the shelter.

We knew that he was going to require a special family who could continue his behavior plan and understand his unique personality. 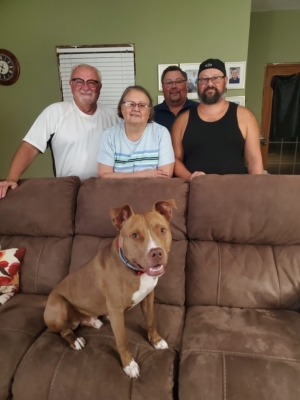 Nearly a year after he first arrived at Animal Friends, that family came along.

They had recently lost their elderly dog and were looking to adopt a new canine companion who needed them as much as they needed him.

After a few meetings and an extended visit to their home, it was clear that Porter had found his match. Despite all of his challenges, Porter and his new family quickly formed a bond that was based on trust and understanding.

At Animal Friends, we know that each animal is unique. Whether they are with us for days, weeks, months or longer, we are committed to understanding what each individual dog, cat and rabbit needs to feel safe, comfortable and loved.

Your donation can ensure that Animal Friends can provide the highest level of care and that we can continue to have the talented and credentialed staff and volunteers on our team to provide lifesaving support to the animals in our community who are struggling the most.

Whether they face medical issues or behavioral challenges, your donation will provide companion animals like Porter with what they truly need … a place to call home.

“Such a clean, organized and loving environment! Beautiful campus and a very well run organization. ”