Adventures of a Foster Mom 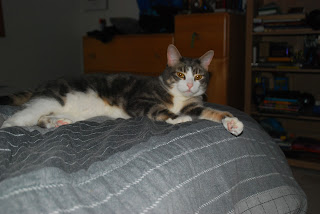 Guest Blogger: Susan Gottfried
This update is part of an ongoing series.
I haven’t written much about Geronimo since he’s been here with us – and he’s still here! – because of two reasons. One is that I’ve been crazy busy with work and kids. The other is directly related to the boy himself.
I have been worried sick about his bladder stones. If the special food Geronimo’s on doesn’t do the trick, he’ll have to have surgery. I didn’t worry this much when my son had to have his tonsils out when he was four.
The reason, of course, is rooted in the fact that Geronimo’s a cool cat. He’s got an earthiness, a way about him that suggests he gets what this is all about. I think he genuinely knows this isn’t his forever home, and if so, he’ll be the first cat who has understood that. That doesn’t mean this intuitive boy will intuit  surgery, though, and I don’t want to put him through something as scary as an operation if we can avoid it.
Right now, signs are positive and the stones are slowly dissolving. So long as I’m careful with his food and make sure Geronimo only eats his special food, the hope is that his stones will keep shrinking. My hope after that is that the stones don’t recur.
Now, Geronimo’s not quite as much fun as Zenji had been. He doesn’t have crazy adventures, he doesn’t steal toys, and he doesn’t drink from anyone’s water but his own. But he does one thing no other cat has done: he crawls under the covers and sleeps with my son. 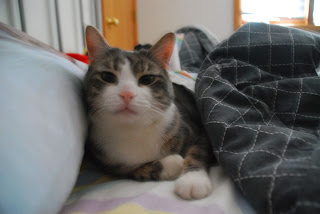 Back before my Animal Friends days, one of my two original cats used to sleep under the covers with me. Cooper was only allowed between the sheet and the comforter because his toenails would scratch me up pretty good. A few fosters since then have crawled in with me, but none have joined my son – who was pretty jealous of my continued good fortune.
Geronimo doesn’t do it often, and when he does, it’s not a night-long commitment, but every now and then, he’ll burrow under the covers and come morning, instead of a sulky pre-teen, I’ll have a child who’s all but glowing and definitely feeling the love.
This entry was posted in adopt, cat. Bookmark the permalink.

“There are so many amazing things about Animal Friends! We are truly blessed with them. ”