Angels and our Animal Cops 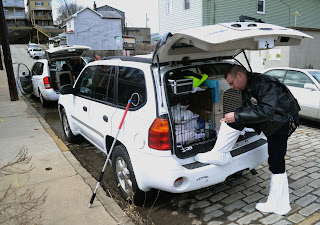 As I write this, two small Yorkies in the Pittsburgh area are living in an empty house, not sure when their caregivers will show up again.

Neighbors say the owners occasionally stop by – maybe once a day, or once every three days

As per the law, the officers could not confiscate the home-alone dogs immediately. But, the next steps in their landlord/tenant dispute are already in motion with the courts. The investigation continues, with check-backs planned. Those dogs will not suffer.

Angels in the mix?

This neighbor acted when he saw injustice.

Let’s face it. Too many of us sit back and turn a blind eye when we see wrong doing.

However, some take action.

A normal everyday guy with oversized khakis and worn out sneakers decided to make the world a little bit better. Maybe not for all of us, but at least for those helpless little dogs.

So I go to bed tonight knowing that this angel, and many like him, are out there. None of us are perfect, and we live in a very imperfect world.

But some are making our community a little less imperfect.

“They were so helpful in the adoption process and made sure I knew all the details of the dog I adopted!”