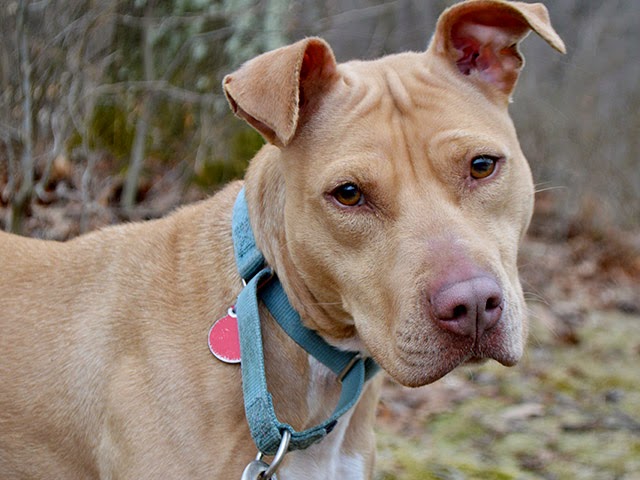 Comet came to Animal Friends in January 2014 as part of a Humane Investigation case.  She and five other dogs had been chained outside during one of the coldest winters in recent history.  When her rescuers arrived, they found unsanitary conditions and six helpless animals without food or water. Although she had a bitterly cold and dismal start, Comet’s luck was about to take a dramatic turn.  Her new family at Animal Friends was anxiously awaiting her arrival.
As a result of Comet’s history, she came to Animal Friends a very fearful little girl.  Simple things that responsible pet guardians provide for their animals everyday—exercise, play, socialization—were foreign to Comet, so she had to start from square one.  Since her anxiety and clever nature made her an excellent escape artist (Harry Houdini would have been proud), she was initially walked by two people at the same time and she was limited to indoor play only.  She was very shy with all people, even other dogs, which made any interaction a struggle for her.
Today, thanks to the love and patience of Animal Friends staff and volunteers, Comet seems to have turned the corner.  She now plays with toys, begs for attention from her handlers and walks with growing confidence.  She has even been used as a demonstration dog in the Animal Friends Training Class “Fearful Fido” which helps dogs with similar behavioral issues.  Comet has been given the tools and foundation for a successful rehabilitation.  She just needs a forever home to complete the process.
To help animals just like Comet, donate to Animal Friends’ 31 Days of Compassion here: www.ThinkingOutsideTheCage.org/31Days. Without your support, important programs like our Animal Friends University classes and Animal Friends’ Humane Investigations would not exist. Because of your donations, Comet has a second chance.
This entry was posted in comet, fearful fido, humane investigation. Bookmark the permalink.