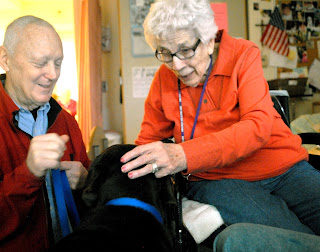 A veteran clad in Steelers garb vigorously spun the wheels of his chair and glided down the hallway at the Southwestern Veterans Center in Pittsburgh.

“Is that a dog I hear? Do we have a dog here?” he cheerfully grinned while asking the nurses.

Ricky, a 5-year-old chocolate Lab, sauntered out of a resident’s room to greet the man. The veteran reached down and scratched Ricky’s silky smooth ears as they both sported oversized smiles.

Then it was show time. Ricky sat down on all fours with his front legs pointed forward. David placed a treat on his paw.

“Say ‘now’ when you want Ricky to grab his treat,” David told the veteran. He peered down from his wheelchair and paused for a second while the well-trained dog waited for his command.

“Now!” the veteran called. Ricky snatched up the treat. His new friend bellowed a lively laugh that filled the hall. 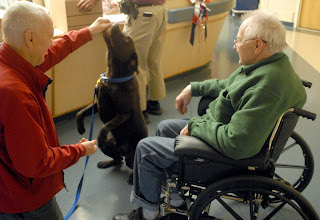 Ricky, a certified Canine Good Citizen, then traveled down the hallway to spread his cheer to the other residents, many who are terminally ill and are grateful for the friendly greeting.

Some residents were bedridden, so Ricky stood up and rested his front paws on their bedside and inspired a faint but thankful smile. Others were wheelchair bound with limited movement. A few had missing arms, most likely the result of battle. But they all did their best to give the Ricky a pat on the head. One resident, who walked with some difficulty, grabbed Ricky’s leash and joyfully walked him down the hallway. At the end of the trek he rested against the nurse’s station.

“Thank you. Thank you so much,” he repeated with slightly winded breathing.

Ricky even pulled tears of joyful and sentimental memories from one resident. 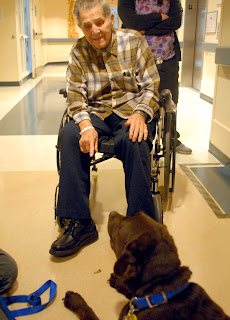 “I once had a Cockapoo,” he cried while rubbing Ricky’s head. He was elderly, in a wheelchair, and had bandages and braces covering both arms. With effort, he slowly reached for a bag of pretzels, pulled one out and took a bite. He then offered Ricky the other half. Even though Ricky had a belly full of treats, he was eager to share the fare.

“Thank you for coming in,” the veteran choked between tears.

Animal Friends’ trained Pet Therapy volunteers bring the joy and gentle healing of companion animals to individuals in nursing homes, assisted-living facilities and hospitals. The contact encourages communication, socialization, independent movement for the immobile and memory stimulation. Our Pet Therapy volunteers have visited over 100,000 people since 2006! If you’d like to join them, visit www.ThinkingOutsideTheCage.org/volunteer.