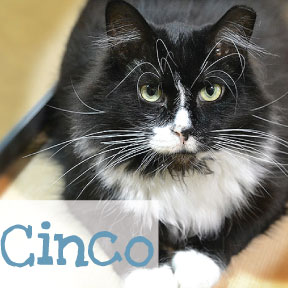 After his owner abandoned him, Cinco was rescued by Animal Friends’ Humane Police Officers. He was found flea- and lice-ridden and suffering hair loss as a result. Upon coming to Animal Friends, the medical team went to work – fleas and lice were treated, long nails were trimmed and his few remaining teeth were cleaned. On the outside, Cinco quickly looked like a brand-new cat. But he still had a few hurdles to overcome.
Upon being abandoned, Cinco was left fearful and anxious – it’s no surprise he hissed and spat at anyone that approached him. But staff and volunteers would not be discouraged. They worked diligently with Cinco. They were acclimating him to human touch and affection – showing him the love he should have been receiving all along.
Animal Friends is unique, we’re not only concerned with the animals’ physical wellbeing but also their mental wellbeing. Extensive training is given to volunteers to reduce the animals’ stress levels in order for our resident dogs, cats and rabbits to remain as comfortable and calm as possible in the shelter. This work takes time to be successful. With Cinco, day-to-day progress was minimal but the small victories added up. He was overcoming his distrust of people and he was eventually cleared for adoption!
Staff and volunteers were really taking notice of Cinco’s improvement. He was doing so well that he was moved from his own kennel into the cat free-roam room. He would now live and socialize with other cats in a homelike environment. And after one year of being an Animal Friends resident, he was adopted. Cinco, now Oreo, is happily living out his years with a feline sibling in a loving, forever home.
Cinco’s story is one of the many happy endings at Animal Friends. These are the outcomes Animal Friends strives to achieve. And you can help the animals in the Pittsburgh region to get their second – and third – chances at a happy ending. Your Sarris candy purchase will help more pets, just like Cinco, to find their much deserved forever homes.
This entry was posted in cinco, fundraiser, sarris. Bookmark the permalink.