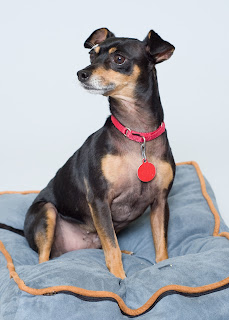 Every dog that comes to Animal Friends has its own story.  Some stories are happy but some have sad beginnings.  Some examples include families moving and being unable to take their pet with them. Sometimes an animal was found as a stray or abandoned.  Even though some of these stories start off sad, they usually finish with a happy ending. No story has ever had such a dramatic turn around than that of Primo, a black and tan Chihuahua mix.
Primo came to Animal Friends almost a year and a half ago, in March of 2011.  He was rescued from horrible, unsanitary conditions with his sister, Paquita by Animal Friends’ Humane Investigators.  Both dogs were severely under socialized, as they had spent their entire lives, about six years, locked in a basement with little human contact.  Neither had ever gone to the vet, the dog park, the groomers, went on a walk, played with other dogs, or had the chance to curl up and watch TV with their owners.
At the very sight of a human, they would both tremble and cower.  Everything was a challenge for them.  Leashes were scary and neither dog wanted anything to do with them.  Walks were difficult but Animal Friends staff and volunteers persisted.  Soon, Paquita went home with her forever family.  Poor Primo was left by himself. 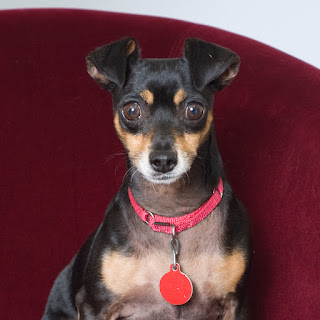 Primo wasn’t doing well in a shelter setting and staff decided that he needed to go to a foster home where he could get some individualized TLC and his behavior issues could be addressed on a one-on-one basis.  Lynn Rothenberg stepped in and offered to take Primo home.
“I have pretty social and playful dogs,” Lynn said.  “I thought that Primo would really be able to learn from them and relax a little.”
It took Primo a few days to get adjusted to Lynn’s busy household but since moving in in November, Primo has made huge progress.
“He now will play with toys.  You can’t watch him play with them though!” Lynn said, laughing.  “If you’re watching him, he’ll stop and leave the toy on the floor.”
In addition to toys, Primo also plays with Lynn’s other dogs.  The other dogs are a little wary of him because Primo used to reject their offers of playtime when he first moved in.  “They are a little shy because they’re not sure if he really wants to play.  Everyone seems to get along though and the other dogs will learn he really does want to play,” Lynn said. 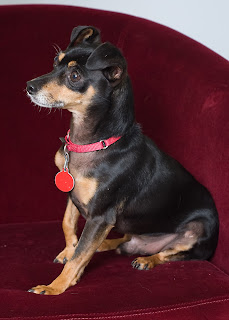 Primo loves to go outside and run in the backyard.  He also loves Lynn’s neighbor.  “He dances for her!  He also will dance for treats. He’s very food-motivated,” Lynn said.
Primo is crate trained and will need to always have a crate as a “safe spot” but he has graduated from sleeping in the crate at night to sleeping with Lynn.
“He now will come and greet people, sniff them and likes to be petted,” Lynn said.  “He really does enjoy sleeping in bed with me.”
From a frightened and cowering to playing in the backyard and “dancing” for people, Primo has come a long way.
“He has made lots of progress, like night and day from what he was,” Lynn said.  “He will never be a typical dog but he has come so far.  And what’s a “typical” dog anyways?”
Call today to find out more about Primo and set up a time to meet with him!  Or check out our other adoptable dogs on our website.  Click here!
A special thanks to Linda Mitzel for the photos of Primo.
This entry was posted in adopt, dog, foster, primo, success story. Bookmark the permalink.