From Shelter Dog to Theater Star 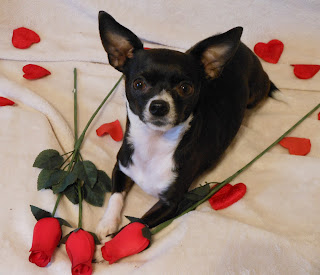 Guest Blogger: Kathy Morrow, Animal Friends Volunteer
Benji isn’t the only former shelter dog to become an adored actor.  Topper, a dashing black and white adopted from Animal Friends a little over a year ago, landed a role in The Last Romance this June at the South Park Theater!
Tiny Topper’s life wasn’t always so glamorous.  Before arriving at Animal Friends, this adorable little dog was homeless and wandering the streets of .  Animal Friends fortunately works with the shelter there and brought this scared, trembling little guy to their shelter on .
When Topper arrived at Animal Friends, he was no less than terrified.  Luck was on Topper’s side.  A volunteer well-known for her love of Pit Bulls was uncharacteristically drawn to Topper one night.  When Lisa first met Topper, he would not eat and he peed submissively out of fear in the kennel.  Lisa took him outside, sat under a tree, hand fed him, talked soothingly to him, and fell in love with the little dog.  Then, she did the most loving thing she could think of and gave him his forever home.
So, how did Topper go from being a fearful little fellow to the confident, calm star of the stage?  Love, patience, and training – the three ingredients that every dog requires.  Lisa devoted herself to her new family member.  She took the necessary time to potty train, crate train, and socialize her dog.
Lisa whole heartedly made the commitment to Topper.  She brings him to tea cup dog socials at Animal Friends where he is adored by both the dogs and the people.  She also frequently takes him to area dog events for more socialization.  Although she is an extremely knowledgeable dog handler at Animal Friends, Lisa enrolled Toppie in a Companion Dog Manners class at Animal Friends.  She would also eventually like to train Topper to be a certified therapy dog.
Lisa’s father, who’s very active in the local theater scene, mentioned that he knew of a who might be able to handle the role in a play, and the rest is history.
On opening night, a group of Animal Friends volunteers were there to support Topper in his new venture.  They were filled with pride over the little shelter dog who had come so far.  They heard whispers of excitement in the audience that there would be a dog in the play!  Topper’s performance was flawless, and at the end, he was presented with a bouquet of roses made of Milk Bones and red foil.  He also received a standing ovation! 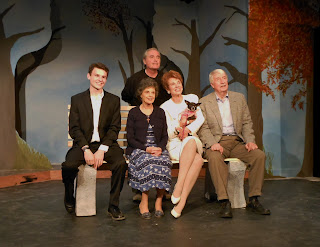 We volunteers at Animal Friends can’t comprehend people’s surprise when they learn that such a wonderful, adorable, talented dog came from a shelter.  Animal Friends is full of magnificent dogs just waiting to be discovered!
Click here to meet our adoptable dogs right now!
This entry was posted in By Kathy Morrow, chihuahua, dogs, Happy Tails, pet-assisted therapy, volunteer. Bookmark the permalink.