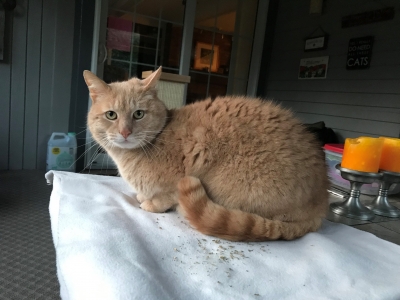 Garfield was a semi-feral cat who was taken in by an elderly neighbor for 3 years, lived in a home and became a loving pet. When the neighbor had to relocate, Garfield was put outside in the middle of January to fend for himself. A Good Samaritan brought him inside to live in their enclosed porch while he waits to find a home. Because they have three cats already, the family is trying to find a more permanent living arrangement for him.

Garfield is a gorgeous 4-year-old orange tabby who weighs about 11 pounds. He is neutered, litterbox trained, uses his scratching post and loves being brushed and petted. He is very shy after having to relocate, but he slowly warms up to people over time. Garfield is up to date on his shots and has

tested negative for FEL and FIV. He seems interested in other cats but not dominant – but, any introductions to other cats would need to be slow and supervised. This sweet guy needs a patient family without dogs or young children. After gaining his trust, Garfield’s foster family is able to pet him all over, pick him up and curl up for a snuggle. Now, they’re hoping another family will show him the same love and patience in a home he can call his own.