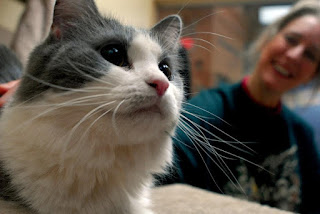 On December 15, 2012 an incredible tragedy occurred in Newtown, Connecticut.   The shooting at Sandy Hook Elementary School took twenty-six lives that morning, including 20 children.  We all vividly remember that day. Everyone I know was torn apart by that event.

On that same day at Animal Friends, a little gray and white cat named Macadamia went about her usual business, un-phased by the tragedy that had just occurred.  She had been at the shelter for 1-and-a-half years.  When Little Mac arrived at the shelter, she brought with her her litter of kittens.  They all went into a foster home until the babies were old enough to be weaned, spayed or neutered and put up for adoption.   As is so often the case, the kittens were adopted quickly but their mom was not.

When the kittens left Macadamia, we learned just how frightened she was.  We found her to be a very scared little cat that hissed and swatted out of fear.  We wondered if she could be feral.  The volunteers began to spend time with her & little by little she calmed down.   When we realized she was not feral the real work began.  The volunteers spent countless hours with Macadamia; talking softly, touching gently, using positive reinforcement with treats, and giving the little cat much deserved TLC.  Slowly, Little Mac began to respond.  She realized that she liked the attention and being doted upon.  She remained shy, but became very lovable and cuddly.  Then the wait for a family began.

About two weeks after the Newtown tragedy, Marti came to the shelter.   She told me she’d like a cat that could live with other cats and dogs.  She and her husband already had three dogs and two cats at home.  After talking with Marti for a while, I asked if she’d be ok with a shy kitty.  I knew Little Mac liked dogs and cats, so she was my first thought.  Marti was interested in meeting her.  I put them together in a get acquainted room and then left so they could get to know each other.  I went back about 10 minutes later and Marti had fallen in love.  She just needed to bring her husband in to meet Macadamia.

Before she left, Marti and I spent some time talking.  Marti told me why she was adopting that day.  One of the children killed in Newtown was a little red-haired girl named Catherine Violet Hubbard.  Catherine had loved animals and had said that she wanted to be a veterinarian when she grew up.  Her parents had asked that people honor her by donating to their local animal shelter.  Marti said she couldn’t think of a better way to honor Catherine than by adopting an animal who desperately needed a home.  Marti began to cry talking about the Sandy Hook children, so I joined in.

The next day, Marti and her husband, Ray, came to the shelter to close the deal.  They would definitely take Macadamia to their home.  Mac had been at Animal Friends for over a year.  Maybe she was just waiting for Marti and Ray all along.

By then it was a week before Christmas and three weeks after twenty children, including Catherine Violet Hubbard, were killed.  Marti and Ray decided to make something good come out of something so horrible.   They adopted a tiny cat in honor of a beautiful little red-haired girl who loved animals.   That small gray and white kitty now has a wonderful family and is named Violet.

“Animal friends is the best! I got my sweet girl Aspen there and the staff was so friendly and helpful.”