How Glitch Became the Bark in the Dark Mascot…and Helped Homeless Pets! 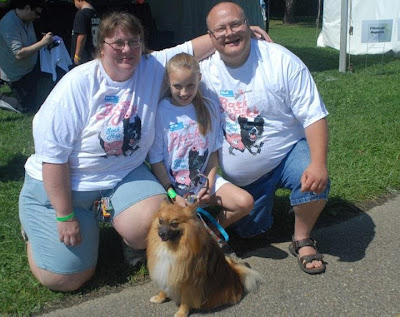 By Christy Bostardi, Special Events Coordinator
Every summer, our city of Pittsburgh brings beautiful scenery and abundant activities for its residents to enjoy. From concerts and festivals to Kennywood and Pirates’ games, there is never a shortage of things to do. A new favorite pastime – one that is growing each year – is the pledge walk. Pledge walks (sometimes known as “walkathons”) are fundraisers that rely on attendees to collect donations and pledges in support of their participation in the event. In 2012 alone there were more than 20 pledge walks in and around the ‘Burgh, each supporting a great cause. It makes you wonder – with so many to choose from, how do you pick one? For Janel Burkhart, it was easy. She found the walk that benefits homeless animals.
During the summer of 2012, Janel and a loyal group of 7 teammates – Jonathan, Lucas, Cameron, Michael, Alexis, Evelyn and Bob – trekked the streets of Pittsburgh in search of sponsorships for Bark in the Park. She had set a goal of $3,000 and was determined to meet it. The biggest motivation in her quest: the furry residents waiting for homes at Animal Friends. Each day, Janel and her group knocked on doors, talked to neighbors and even strangers on the street. In fact, they did so much walking, Janel lost nearly 25 pounds! “I wanted to raise the money for the animals,” Janel said. “But, it was for me too. I felt good because I was getting out of the house, working for a good cause and feeling healthier.”
Glitch, Janel’s beloved dog, also kept her moving. If she collected enough money to place 1st in the top fundraisers for the event, Glitch would become the next “face” of Bark in the Park.
After 6 long weeks, Janel and her posse hit their goal of $3,000 and then some! The grand total? $3,104. Janel and her team not only came in 1st place, but they raised more money than any other team (or individual) for Bark in the Park in over 3 years. Their efforts paid off – Glitch secured his place as the 2013 mascot and the homeless residents at Animal Friends could sleep easy!
It’s people like Janel that make all of Animal Friends’ efforts possible. With $3,000 we could purchase 2,500 pounds of food for the Chow Wagon, perform more than 80 spay and neuter surgeries or provide medical care for sick animals. Every dollar counts when it comes to caring for our residents.
So, do you have what it takes to beat the 2012 top fundraiser? There is still time to collect your pledges and register for the event! For more information, visit www.thinkingoutsidethecage.org/Bark2013.
This entry was posted in Bark in the Dark, Bark in the Park, By Christy Bostardi, event, special event. Bookmark the permalink.

“I tell everyone that I know to check Animal Friends if they are looking for a pet.”