Home » Other Ways to Give » Veterans’ Programs

Founded in 1943 as an avenue of support for soldiers leaving for World War II who had no place to safely leave their beloved companion animals, Animal Friends has a longstanding commitment to our brave men and women serving in the Armed Forces. To strengthen this commitment, and understanding the potent and healing power of the animal-human bond, we are proud to offer a series of targeted adoption programs to support and thank our regional veterans. Veterans’ Programs at Animal Friends is made possible by the support of a very special fund, named in memory of Maj. Benjamin Follansbee, a decorated member of the military. 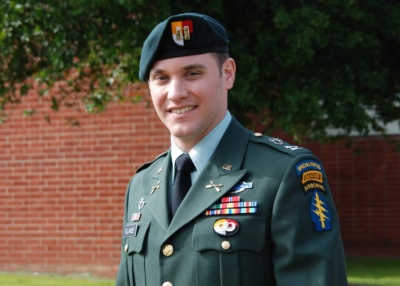 Maj. Follansbee was an Airborne Ranger who subsequently earned his coveted Special Forces tab and Green Beret, thereafter becoming a HALO Airborne Team commander and HALO Jump Master. He served on multiple deployments in both Iraq and Afghanistan, earning two bronze stars among numerous other commendations. He was described by his peers as being not only highly dedicated and accomplished, but also humble, loyal and compassionate.

Tragically, Maj. Follansbee took his own life in December, 2012. His parents, Dr. and Mrs. William Follansbee, know firsthand the alarming statistics about suicide in the military and the challenges that many veterans face as they transition from military duty to civilian life.

For that reason, the Follansbee family established the Maj. Benjamin Follansbee Memorial Fund. Its mission is to help veterans while at the same time saving homeless shelter animals — one veteran and one animal at a time.

Individuals, businesses and groups are encouraged to consider a gift to the Maj. Benjamin Follansbee Memorial Fund to support Veterans’ Programs at Animal Friends.