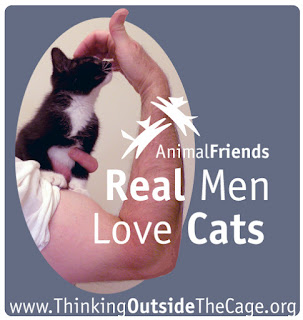 Now I could explain what a “real man” is, but writers have spent millions of words trying to define men. (Just ask my boss Jolene) So I’m just going to stick with the stereotypical “rough and tough” image. It’s more fun that way.

Silver screen legends including tough guy Marlon Brando and superspy Sean Connery had cats. The Godfather of punk rock, Joey Ramone, was often photographed with his black cat. And Glen Danzig, the iconic dark singer of horror-gothic-metal music, was photographed by the Paparazzi buying cat litter. 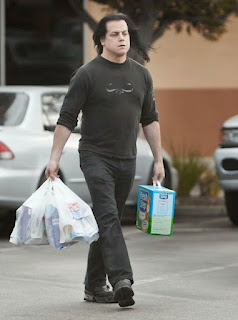 During World War II, British Prime Minister Winston Churchill, whose face was often compared to a bulldog, would bring his cat to war-time cabinet meetings.

And now there’s me. Not only do I have four cats, but I photograph, play, converse and write about our feline friends here at Animal Friends. I’m pretty much an arms length away from a cat at both work and home – and I love it. 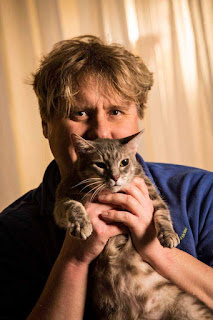 Now am I a real man? I drink pale ale, wear kinda/sorta motorcycle boots, and I once played bass in a thrash metal band called LIVID. (On the flip side, I hate watching sports, I love the smell of lavender, and I did cry at the end of Titanic.)

Also, I love science fiction. That’s why I named one of my cats (pictured above) after Spock from Star Trek. By the way, Spock was played by Lenard Nimoy, another fellow cat lover.

Are you a man with a cat? If so, please write to us and send us a photo! Send your manliest shot to jmiklas@ThinkingOutsideTheCage.org.

If you don’t have a cat yet, what are you waiting for? Click here to meet Animal Friends’ adoptable cats!