The hard part of having multiple cats who are on multiple diets is keeping the proper noses in the proper food bowls.

I had done this before, with my Devon Rex rescue cats. Chanterelle had been on a restricted diet; Cooper wasn’t. The solution proved to be easy, as Chanterelle had a hip injury and would no longer jump onto my kitchen counters. So I’d leave a container of Cooper’s favorite food open on the counter, and a bowl of Chanterelle’s prescription diet at their traditional feeding station.

No such luck with Geronimo. Or Milo and Lucy.

So I began by feeding Milo and Lucy on my island, and Geronimo on the counter. This works—so long as the kids and I remember to put the food away when the cats are done with it. After all, the medical staff at Animal Friends warned me when I brought Geronimo home that they had to work to convince Geronimo to eat his prescription food. He is a well-behaved, easy going cat … who may be convinced that he needs to eat his prescription food, but that doesn’t mean he doesn’t love whatever I’m feeding Milo and Lucy. If their bowl isn’t placed safely on top of the refrigerator, he’ll happily chow down.

The one thing I didn’t expect was that my sweet Lucy would love Geronimo’s prescription food. That she would jump up onto the counter and wolf down whatever she could, even the half-bitten crumbs Geronimo leaves behind.

In fact, she likes it so much that sometimes, she’ll go to great lengths to get to it. Apparently, she missed the memo that prescription food is icky. 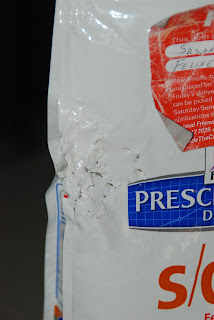 Now the sad news about this prescription food dance we’re doing over here: it’s working, but not fast enough. Geronimo is scheduled for surgery to remove his bladder stones on April 4. Let’s hope it all goes well; he’s not about to be a foster failure yet and spend the rest of his days with us, but that doesn’t mean he hasn’t wormed his way firmly into our hearts over here.

Editor’s Note: We’re happy to report that Geronimo did well in his surgery and is at home recovering.  A big thank you to the veterinarians who took great care of Geronimo!

This entry was posted in by susan gottfried, cat, cats, foster, foster mom. Bookmark the permalink.

“Such a clean, organized and loving environment! Beautiful campus and a very well run organization. ”


“We got our baby girl Maya there over a year ago and had a wonderful experience!!! They were friendly and helped us adopt our fun, vocal, sassy beautiful girl as a member of our family.”


“Excellent dog training classes!! Fun for doggies of all ages!”


“Very caring and friendly staff! The dogs and I love it here!”


“Animal Friends is the most sophisticated place to adopt a new pet. If ever I plan to expand my furry family, I will go to Animal Friends to find him.”


“I had dropped off my cat to be spayed, very friendly staff, I am confident they will take excellent care of her.”