For 24 years, Matt and Clara Jacob have participated in Animal Friends’ Therapets program, introducing shelter dogs and cats to assisted-living residents. The Jacobs prioritized these sessions over the years and never cancelled a single appointment. Having accumulated a combined 2,116 volunteer hours throughout their Animal Friends tenure, the couple is officially “hanging up their leashes” and retiring from the program.

Therapets volunteers form teams with their own dogs, cats or rabbits who provide comfort and affection to individuals during visits to hospitals, specialized care facilities, college campuses and other locations. The pets undergo training and certification to ensure that they are appropriate for the program.

When the Jacobs completed their Therapets training, the program operated with volunteers taking Animal Friends’ resident animals, instead of their own pets, to Therapets visits. The Jacobs have remained the only ones who continue to take approved shelter animals for Therapets visits. “They don’t do it that way anymore, but they [Animal Friends staff] cater to us, which has blown my mind,” Clara said. 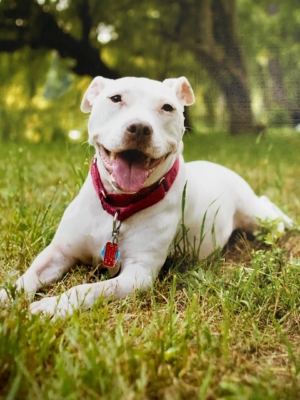 One Friday and Saturday a month, the Jacobs brought Animal Friends’ adoptable animals to meet assisted-living residents. And they always loved meeting up with fellow volunteers Fred and Dawn Riedel.

“The dictionary doesn’t hold enough kind words to say about Clara and Matt,” said Rosemarie Malanoski, Vincentian Schenley Gardens activities manager. “Their dedication to our residents and families these many years is the epitome of volunteerism. Clara and Matt never missed a Friday afternoon, always lifting spirits and bringing smiles to everyone they encountered.”

Matt and Clara were responsible for education regarding the shelter and its adoptable animals. The Jacobs found it especially rewarding to change misconceptions regarding “bully breeds,” such as American pit bull terriers, American Staffordshire terriers and Rottweilers. Matt Jacob recalled times when people were surprised to learn that the cute, friendly dogs with whom they had interacted were, indeed, pit bulls – a canine type they had initially feared.

Over the years, the Jacobs have developed relationships with the Vincentian Schenley Gardens and Fair Oaks of Pittsburgh employees, residents and relatives who visited during Therapets sessions. “In these assisted-living homes that we go to, some residents – they have no family. Many of them when they pass away, we’ll go to the funeral homes. They’ve asked Matt to be the pallbearer. There were a couple of funerals, where I did the eulogies,” Clara said.

The Jacobs say that the program has inspired several relatives of assisted-living residents they visited to adopt Therapets animals. And, Matt and Clara adopted two Animal Friends dogs: a boxer, originally named Lincoln, who they renamed Elvis and an American Staffordshire terrier, originally also named Clara, who they renamed Charm. Though both have crossed the Rainbow Bridge, the Jacobs have continued to open their home to rescue dogs and currently are pet parents to special-needs dogs Mr. Bojangles and Dogzilla.

While the Therapets program was on hiatus during the COVID-19 pandemic, the Jacobs decided that it was time to retire. Clara plans to continue her involvement with the local animal rescue community.

The Jacobs have positively impacted thousands of lives – both human and animal alike – through their Therapets involvement. Fully embracing Animal Friends’ mission statement, they have inspired “a community where the human-animal bond is celebrated and nurtured,” regardless of one’s living arrangements.