“We’re in this for the long haul.” Adopters grant a second chance to rescued cats! 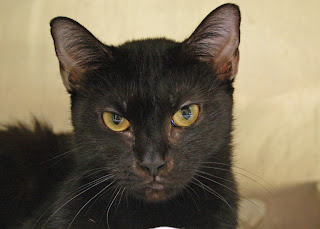 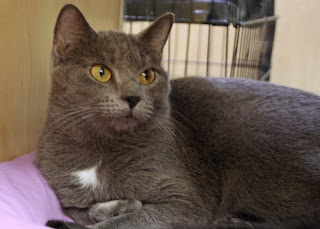 Last Saturday, a young couple came to Animal Friends to adopt a new companion for their eight year-old cat, who was lonely after her buddy passed away. They had heard about our recent rescue of dozens of cats from a house in Carrick, and were especially interested in adopting from that group of cats who desperately need a second chance.
Fortunately, most of the cats from that rescue are cat-friendly, and they visited with several who warmed up to them almost instantly. But somehow, they didn’t feel they had found the right one.
Several cats later, and shortly before closing time, the young woman (with some help from a shelter volunteer) had talked her husband into considering two cats. They asked to visit with a pair of petite and gorgeous felines, Windchime and Wyvern, who had bonded while sharing a cage.
The couple was not deterred by a warning that the cats were quite shy and fearful. One of the cats was loaded in a carrier and taken to the get-acquainted room, but not before attempting a few scratches on the way. Even after calling in reinforcements, the second could not be caught and placed in a carrier, creating more scratches and soiling herself from fear.
The couple had fallen in love with the first cat, shy but willing to be held and petted, and they weren’t ready to give up. A brief visit to the cat condo where Windchime and Wyvern were housed convinced them that the two might be a project worth undertaking.
“We’re in this for the long haul, not just for a couple of weeks,” said the young man when told that it might take awhile for the two to settle into their home.
They pledged to come back in the morning, and true to their word, returned to adopt both cats, knowing full well they might have a challenging road in the beginning. Thanks to their patience and kind hearts, two cats who had a very rough start are now in their forever homes!
Eleven cats from this rescue are still waiting for a place of their own, all with “W” names: Wafer, Waggle, Wallflower, Wasabi, Weaver, Wei, Whirlybird, Whittle, Winsome, Wisteria and Wonka, ranging from nine months to eight years in age. We hope that’s not too much to ask – what do you think?

Pets are Priceless! In an effort to educate the community about the importance of adopting a shelter pet, and find qualified, permanent and loving homes for as many homeless animals as possible, Animal Friends is waiving our requested adoption donation for all pets aged 2 and up between November 25 and December 31!