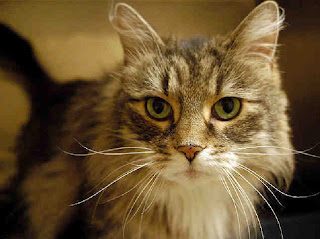 Finding just the right pet can be a daunting task when several species are involved. But as gorgeous long-haired kitty Charlene discovered, at Animal Friends it can work out just fine.

A couple with a cat and two dogs arrived at Animal Friends on Saturday looking for another feline, having recently lost a cat with multiple medical problems. Finding a kitty who could successfully live with cats, dogs, and met with the approval of their humans was the challenge at hand.

Starting with a list of cats that had previously passed dog tests, they looked at several, but didn’t find the right match. With closing time approaching, they were captivated by Charlene. An alert, curious cat dumped at a veterinarian’s office and shaved on her sides from matting, she was quickly gaining a reputation as a lap cat. They were charmed by their visit with her, but two big questions remained: how was she with dogs and other cats? With no history available and a short time at Animal Friends, nobody knew.

We agreed to conduct dog and cat tests with Charlene, and contact the couple with the outcome. Charlene met a cat-friendly canine resident, and after a quick hiss, was accepting and casual about the encounter. She was next introduced to an easygoing cat, and graciously accepted a quick sniffing. Within a few minutes, she was visiting cages, even climbing into an open door to stop in on its rather surprised resident.

While still on the road home, the couple received the call they had been hoping for – Charlene was indeed cat and dog-friendly, and ready to become a member of their furry family! As promised, they returned the next morning to take her home.

At Animal Friends, we’re suckers for happy endings, and willing to do what it takes to make them happen. Won’t you let us help you find just the right companion?

In an effort to educate the community about the importance of adopting a shelter pet, and find qualified, permanent and loving homes for as many homeless animals as possible, Animal Friends is waiving our requested adoption donation for all pets aged 2 and up between November 25 and December 31!

This entry was posted in adoption, By Siri Espy, cats, dogs, multi-species. Bookmark the permalink.