Growing up, Carol Meal’s parents wouldn’t allow her to have a cat. But, that didn’t stop young Carol from venturing to the farm next door to adopt a kitten from her neighbor. It didn’t take long for her mother to discover the kitten in Carol’s bedroom and she was forced to return the lovable little feline to where she had come from. From that day forward, Carol vowed that when she was old enough to adopt her own cat, they would sleep in the bed with her.

Carol’s love of animals started at a very young age. As she grew up, her passion for helping animals in need only grew stronger. When she retired in 2017 after 50 years of working for Duquesne Light Company, Carol quickly realized that she needed the companionship of a cat in her life.

“It was like driving a car and going from 100 miles per hour to a dead stop,” Carol recalls about her early days of retirement. She went to a local animal shelter where she met Yana, a very special 13-year-old cat. She had been surrendered to the shelter several times – once after the kids in her home developed allergies, another time because her owner had to move into a nursing home. “It was just so sad that an elderly cat went through all of that. I knew that she might not have a chance to be adopted,” Carol remembers about that day. “That’s when I said ‘no, I’m not leaving her,’” and she decided to take Yana home.

Yana was a very shy and timid cat who took her time warming up to new people and surroundings. During her first 7 months in Carol’s home, Yana stayed downstairs, retreating to a safe hiding space at the first sign of people. But as the months went by, Yana grew more comfortable in her new home. She slowly began to make her way upstairs, first to the couch, then to the threshold of the bedroom. Finally, one day, she took her first steps into the room, onto a foot stool, up to the bedside table and finally into the warm, cozy bed.

Through her experience with Yana, Carol has learned that there is more she can do to help cats who need extra help to find loving families. So, she began working with our team at Animal Friends to create Yana’s “Special” Felines Fund – a new program that will help to underwrite the costs associated with adopting and caring for cats who have special needs. “I know I can’t adopt them all, but I want to help other cats like Yana who have misfortune through no fault of their own,” says Carol. 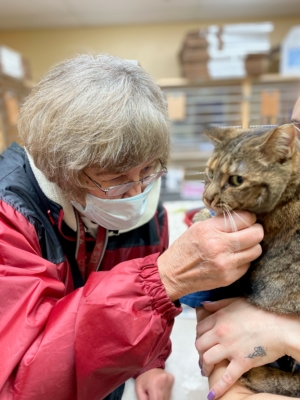 By identifying a small group of adoptable cats who are having a difficult time being adopted, Yana’s “Special” Felines Fund will help to eliminate some of the financial barriers that may prevent families from taking in cats who are elderly, medically or behaviorally challenged or just those who are simply struggling with being displaced from their home. “There are probably a lot of people who want to adopt kittens, but there isn’t a line out the door for senior or diabetic cats,” says Carol. “That will be the best present for me – when the first one of these cats gets adopted.”

As for Yana, Carol is glad that she chose to adopt a senior cat who had been passed over by so many others. “She shouldn’t have been surrendered that many times,” Carol says. “I knew she didn’t trust. I often think to myself that I wish I knew what she experienced, but I’m probably better off not knowing.  She’s happy now, that’s for sure.”

To donate to Yana’s “Special” Felines Fund and meet our adoptable cats, go to ThinkingOutsideTheCage.org/Yana.