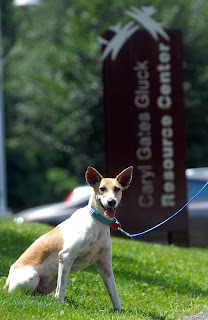 Ruby’s story is filled with as much concern as it is human kindness.

An American Diplomat was in a small village in Suriname, formerly known as Dutch Guiana.  It’s on the northeastern coast of South America. She noticed a thin and frail dog living on the streets. Her little body was covered with mange and her ears covered with fly strikes. The dog, now known as Ruby, was in desperate need of help so the Diplomat became her rescuer. She gathered the dog up, knowing that she needed serious medical treatment and took her back to the U.S. Embassy where she got her the attention she needed. After Ruby’s health improved and her conditions healed, she was given a home at the Embassy. However, the current canine resident Ed (short for embassy dog) wasn’t happy with the new addition and did not welcome Ruby. So the Diplomat, still wanting to find Ruby a loving home, contacted us and ask us to help. We agreed and so she made all of the arrangements and had Ruby flown here to Pittsburgh.

Ruby’s journey has been long but it won’t be complete until we find her the loving forever home she deserves.

Ruby is shy and timid and is sensitive to quick movements & sounds. We don’t know what all she may have experienced on the streets but we can be certain it was scary. Therefore, we prefer that she be adopted into an quiet, adult only home where she can learn life at her own pace.

Ruby recently had her photo taken at Linda Mitzel’s Studio. She needed to be coaxed into the car with a few treats but rode beautifully and adjusted well to all of the new experiences of the outing.


The staff immediately fell in love with Ruby…and we know that you will too.

This entry was posted in adopt, dog, rescue, ruby. Bookmark the permalink.