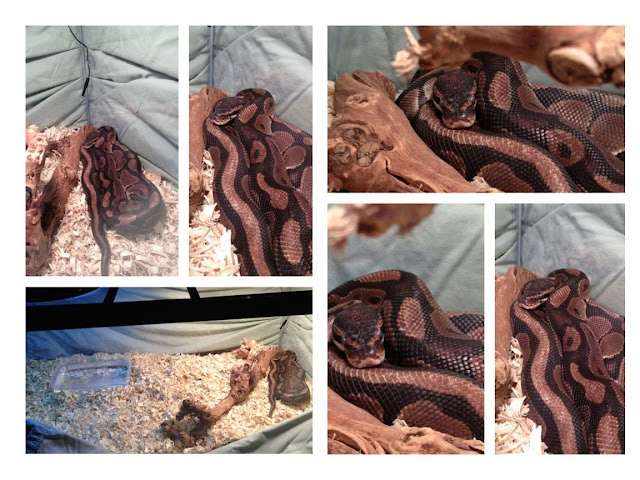 My name is Amy Green and I have a snake in my house. My roommates are less than thrilled.
Over the past year that I have been with Animal Friends, I have seen an abundance of strange things: dogs from house fires, cats abandoned on our walking trails and even 60 chickens showing up at once. Never did I think that a 4-foot Ball Python would come through our doors.

After many names were thrown around, Ryback the snake has found a foster home in my living room until he is adopted.  I have grown quite fond of Ryback. He has already started to go for a swim, bask under his heat lap, molt and eat a thawed mouse.  Ryback weighs under two pounds.  His diet consists of two small frozen mice once a week.  He is very sweet and easy to handle. And, he has an incredible story.

Ryback was brought to us through our Humane Investigation Department. One of our Officers came to the Adoption Desk and asked if any of us had experience handling snakes. We all looked at him as if we were being told to drink spoiled milk.  When we were told the snake would be coming in the shelter, it was a mix of fear and excitement.  The Officer and an adoption counselor went out on their adventure with a slip cover off of a dog bed – we made sure there was a zipper involved! Once they arrived at the scene of the case, Ryback was found curled up behind a couch, cold and alone.  He has been left behind after the previous owner was evicted from the home. It had taken three weeks to get into the house for his rescue.

Here at Animal Friends, we see a lot of sad stories and we try to be the voice for those who cannot speak. When Ryback came through the doors, many ran away and others came to see.  We instantly placed a rice bag into the microwave so Ryback could lay with it and regain a healthy body temperature.  There isn’t much else we could do for him at the shelter, so I decided to offer him a foster home.  I have had small snakes before, however not anything large enough to eat mice.  I rushed to buy supplies and to get him into a warm, safe place – my living room.

On the way home I had made the call to my roommates. As I said, they were less than pleased.  I quickly assembled his new home and turned on the heat lamps. Then the time came to take him out of the cover to go into the habitat.  Before I started unzipping the cover, both my roommates ran upstairs and yelled, “Let me know when it’s out of the bag!”  Ryback now rests happily and safely in a 40 gallon habitat, with a pool and personal sun. By that evening, Ryback had traveled 74 miles in a dog bed slip cover, listened to Christina Aguilera and sat in front of the television during a new episode of House Hunters.

I want to tell the Animal Friends community how lucky I am to have such a wonderful opportunity to provide a second chance for animals and reptiles alike.  We love all animals and make sure who ever and whatever come into our doors we are there for them until death do us part!