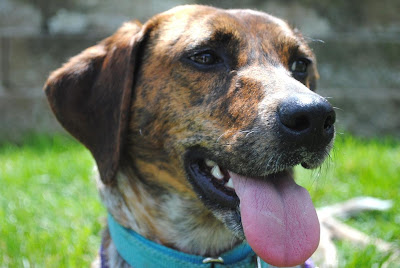 It was Spring 2010. He caught my eye because he was young and energetic. His name was Hickory.
He was about 9 months old and described as a hound/Jack Russell Terrier mix.  I certainly couldn’t have imagined the journey ahead of us at that time.  He had been adopted and returned to Animal Friends, which made him even more appealing to me – I wanted to help him find his true forever home.  The reason for his return was that he was too vocal and urinating in the house.
I quickly learned that Hickory was very excitable – barking, jumping, and nippy when I entered his cage to take him out.  I really can’t remember the sequence of events, but, soon after I started handling him, I noticed that his water bowl always seemed to be empty.  Then, one day while playing in the Outreach Center, Hickory had an accident on the floor, and I noticed that his urine was clear.  After reporting this to Animal Friends’ Medical Department, along with the fact that he drank and urinated much more than normal, he was removed from the Adoption Floor, until they could run some tests.
During the following months, specialists were consulted and appropriate testing was done.  Hickory spent time with a wonderful foster family, who were able to give Animal Friends valuable feedback.  Since the specialists felt that he was born with a condition that causes excessive thirst and urination, they recommended that he start taking a medication, which would help to control those symptoms.
While the Medical Department was dealing with Hickory’s medical issue, Hickory and I tried to work on his high level of excitability and his excessive barking.  As we walked, he barked at other people and dogs.  He wanted to play with every dog that he saw, and that was not possible.  We developed a very close bond, as I grew to love the cute little guy and his great personality.  On one hand, his intelligence impressed me, while, on the other hand, his clownish behavior made me laugh.  Since he was treat motivated, he was very easy to train, and he loved learning new activities.  He was excellent at agility and nose work and learned to run on the treadmill.  He was also great at an exercise called “Relaxation Protocol” which is a 15-day series of self-control exercises, which get progressively more difficult.  I learned that he had another side, where he liked to sit on a bench and snuggle.  Since he, at times, was still jumpy and nippy with some volunteers, we had a “Hickory class” where I tried to help others get to know him and his capabilities.
It appeared that the medication was helping him somewhat, but he still drank and urinated more than normal.  As an aid to the Medical Department, I started recording data and reporting my observations to them.  I still wondered if he could live in a home without having numerous accidents.  In addition, his medication, which he would have to take for the rest of his life, was very expensive.  When prospective adopters were told about the expensive medication, they would lose interest in him.
Then, one day in July, 2011, about a year and a half after Hickory arrived at Animal Friends, a very compassionate man came to meet him.  I was thrilled to share everything I knew about this great little guy who needed a chance to live a normal life.  Frank gave Hickory that chance, and he is doing great.  He still takes his medication, and is having no accidents in the home.  Since he is in a calm, stable home, he is much less anxious, which, in turn, has caused his water intake to be more normal.  Just like any other dog, Hickory goes to the door when he needs to go out.  He still likes to bark – after all, he is part hound!  He loves to visit with other dogs in the neighborhood during his walks.  He has become friends with some children in the neighborhood, who enjoy walking, playing and doing tricks with him.
Frank has been kind enough to keep in contact with me.  I’ve visited with them several times, and Frank calls periodically to give me the “Hickory report,” which always makes me smile.
Hickory is an inspiration to me.  Upon his arrival at around 6 months old, he had many challenges to face, among them, a medical condition which no one was aware of, boundless energy, the inclination to bark at people and dogs just because he wanted to meet them, and the anxiety of living in a shelter environment.  Despite all of that, today he is living a happy, wonderful life with Frank.  Every minute that I spent with Hickory was very rewarding. He holds a very special place in my heart. 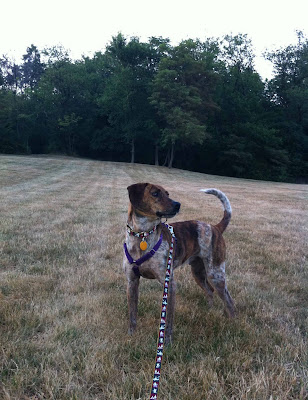 Diane Whittaker was the third-prize winner in our volunteer blog contest! Congratulations and thank you, Diane!