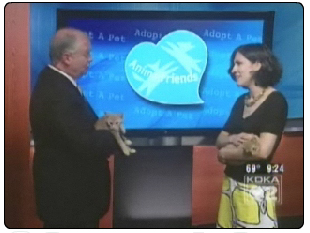 By Jolene Miklas, Director of Communications

I have one of the best jobs in town. As the Communications Director for Animal Friends, I have the fun –and sometimes hilarious– task of taking shelter animals on radio and TV appearances.

As result, I have learned several very important lessons over the years.

1. No food after midnight.


My first radio appearance was a half-hour segment on the Lynn Cullen radio show. All I had to do was bring an adoptable dog to the studio, introduce her to the listeners, and spend the next 20 minutes chatting with Lynn about Animal Friends. I jump at the chance to do that sort of thing now, but at that time, I was a ball of nerves.

So that morning, I put Ginger, a big white Shepherd, into my car and we drove to the studio. I thought potty breaks sounded like a good idea, so after she took hers, I tried to get the big, beautiful Shepherd to follow me into the tiny stall in the ladies’ room. After a few forlorn tries, we gave up, so Ginger followed me onto the elevator and up three stories to the station.

Soon, we were inside the broadcast booth with our host, Lynn. I took a seat on a stool, placed a pair of oversized headphones onto my head, and leaned into the microphone. I was nervous but ready. I remember the very moment we went live on the airwaves, and I thought, “This is it!”

Then I looked at Ginger. And I blurted out across the radio waves: “This doesn’t look good.”

Ginger’s expression was unmistakable. That beautiful dog opened her mouth and got sick all over the floor.

Back at the shelter and glued to the radio, my friends tell me that they heard my mortified gasp and the sound of a door slamming. I yanked the headphones off my head, gathered the dog, summoned the elevator, waited for it, rode three stories back down, and burst outside with Ginger, who, by then, felt perfectly refreshed.

After a few minutes, Ginger and I rode the elevator back up to Lynn, who was calmly describing the dog to her listeners to the best of her recollection. The rest of the interview went fine, and I took care of the clean-up.

That’s the day I learned that otherwise healthy pets can get quite carsick. Now, every night before their media appearances, my animals go on a “No food after midnight” diet. They eat breakfast after they get back.

Our animals are fortunate to go on KDKA’s Pittsburgh Today Live every few weeks. I get to introduce adoptable animals to the live TV audience and talk about our latest news.

One day, I was invited to bring an adoptable cat onto the show to talk about how to give a cat a massage. I let Beth, our resident expert, select the cat with care. We needed just the right easy-going cat who would not only stay calm on live TV, but allow himself to be massaged in a rather chaotic environment. Beth at Animal Friends picked Nathan, the sweetest cat, and he really was.

Once again, I strapped my furry co-star into my Subaru and chatted to him the whole way to the station. I didn’t notice that anything was awry until we were riding the elevator in the parking garage. I thought I smelled something, but I didn’t want to believe it. Instead, I proceeded confidently to the station.

I checked in with the producer and opened the cat carrier. And that’s when I saw it. The poor cat had had diarrhea. Nathan was covered, from head to toe, in diarrhea.

I made a quick call to Animal Friends. I knew it was the height of rush hour, but I begged for someone to bring me a clean cat. In the mean time, I got to work. The ladies’ room was occupied, so I charged into the nearest men’s room and eased my dirty cat into the sink. He had somehow even gotten it in his ears! While the producer poked her head into the men’s room and asked me for updates, I rolled up my sleeves and swiftly but gently bathed the sad cat. I was still holding out hope that I might be able to demonstrate a cat massage on Nathan.

Thankfully, while I was wiping down the cat with paper towels and stalling for time from the producer, Jack from Animal Friends made it downtown in record time. I packed up Nathan (who, rest assured, suffered only from nerves), ran outside and scurried to the Animal Friends van, which was pulled over on Fort Duquesne Boulevard. Jack passed a carrier with a clean cat through the van window while I traded over the smelly cat. I then dashed and skidded onto the TV set, presented the clean cat, and introduced the viewers to the benefits of cat massage.

That was the last time I ever left Animal Friends without an understudy. Now I always, always carry a spare cat. Whether the cats got sick or just a case of cold feet, this trick has saved me many times.

Lesson #3: Keep calm and carry on.

Sometimes, it just all goes to heck.

Like the time Erica and I took two cats and a dog on WTAE’s live afternoon news. Sally Wiggin and I were telling viewers why we needed them to tune into Animal Friends’ Telethon, when Raindrop, the (shaved) shelter cat in Sally Wiggin’s arms, decided that she didn’t want to be on TV anymore. Thankfully, Sally never dropped that cat. Sally twisted and twirled around in a frantic balancing act, and Raindrop took a walk across Sally’s back, firmly clinging to Sally’s leather blazer by her claws. 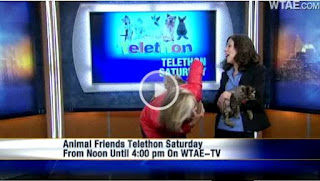 The inelegant scramble concluded with me lamenting “Oh Raindrop,” and, for good measure, a near-fight breaking out between our other cat and the dog.

As always, everything worked out and all of the animals were fine, and adopted shortly after. (And that little Telethon spot was the #1 most viewed segment on WTAE’s website for quite a few days.)

Every day on the job is an adventure, but I wouldn’t have it any other way. I’m ready to take this show on the road again!

“This is the most awesome shelter I've ever dealt with. The staff are so caring and kind. The educational programs are amazing”