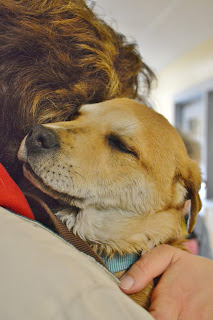 Guest Blogger: Ann Cadman, Health & Wellness Coordinator
Each one of our Animal Friends’ volunteers is a caring and compassionate person. Volunteer Dave Mitchell is no exception.
After dropping his wife off at the airport at 4:30 am one snowy morning, he was forced to change his normal route home.  As he turned from Babcock Blvd. on to Thompson Run Rd., he saw a car flashing its lights at him.  Around the next bend, there was what he described as a “fur ball” walking up the middle of the road in a snow squall. It seemed to be limping.
Dave pulled up in the middle of the road, got out, and helped a three-legged dog into his car.  At home, he fixed up a side of the kitchen where the dog could rest, away from his three Labs. Before Dave could close the small dog gate, the little fellow was over greeting and befriending his dogs Ricky, Lucy, and Macy.
Later that same day, Dave located the dog’s distraught owner. She had been out looking for him for hours. She told Dave that the little dog’s name was Ziggi and that he was a rescued Pomeranian.
We are always been proud of Dave and the work that he does with Animal Friends’ Humane Education and Pet Assisted Therapy programs.  But knowing that his concern for an animal in distress makes us prouder still!
This entry was posted in by ann cadman, dave mitchell, volunteer, volunteers. Bookmark the permalink.