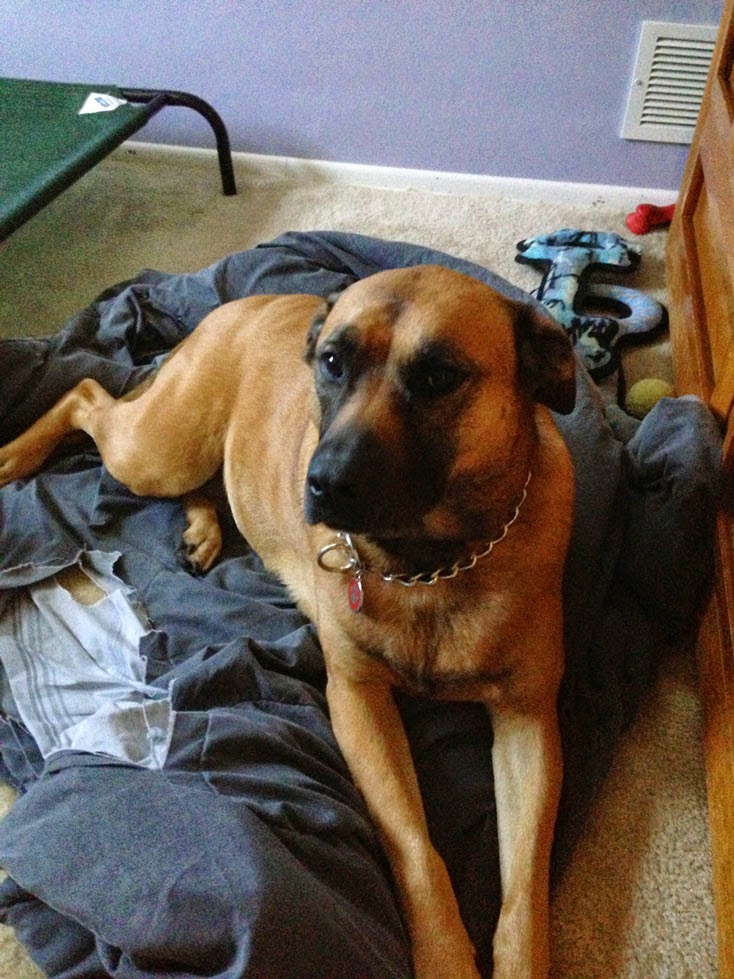 Olivia is 9-10 years old, weighs 70 lbs and is a Rhodesian Ridgeback Mix. Olivia is spayed. 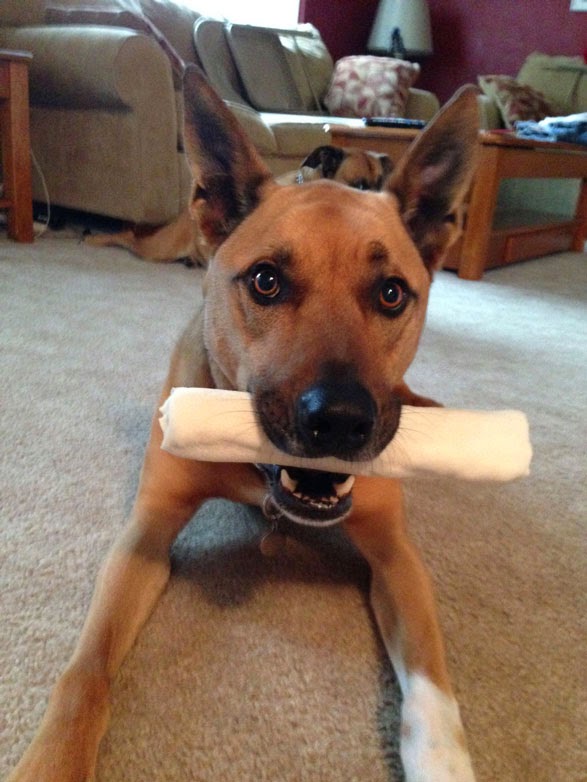 Tucker is 6 years old, weighs 70 lbs and is a Shepherd/Boxer mix. Tucker is neutered.

Olivia has had quite the troubled past, but as we say “has nine lives.” By the time she came into the home at the age of 2, she had been adopted and surrendered back to the shelter twice. We believe that she was abused by an older gentleman and those memories still haunt her today. She still cowers when a hand is lifted and still is leery of older men. It was decided she needed a friend, so Tucker was adopted. She still holds on to her submissive personality. As if her puppyhood wasn’t traumatic enough, she started suffering with anal gland problems. The vet had tried everything he could think of, medicine, injections and exhausted all treatments. The only option left was to put Olivia down. The papers were signed and goodbyes said… then the vet offered one last experimental option. He offered no promises and had no experience with the surgery, but offered to try to remove her anal glands. There was nothing to lose, so the go-ahead was given. She has since recovered and is no longer under treatment. She licks obsessively, your hand, a part of your back exposed from a lifted shirt, the air, anything and everything. Olivia is happy to go for a ride in the car, doesn’t have the energy of her brother, but keeps up on walks, loves to chew a good bone or lounge in the shade.  She doesn’t pay too much attention to toys unless she is trying to steal it from her brother and taunt him with it. She will do anything for food, but knows better than to beg for food from us. She has struggled to contain her excitement and often jumps on us and guests. While she is 9-10 and has slowed down, she is absolutely determined and can keep up when she wants to. 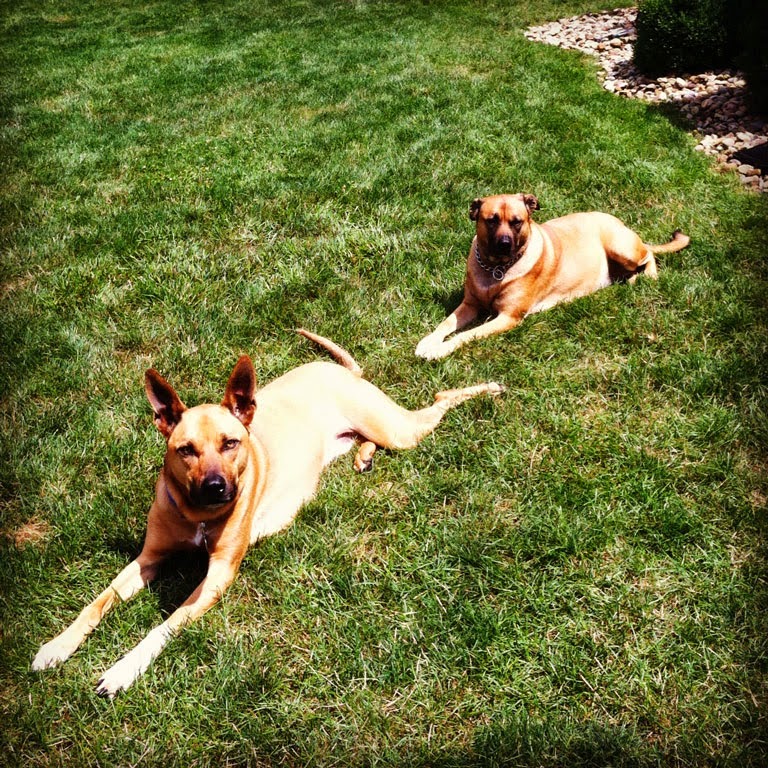 Tucker was added to the house to keep Olivia company. He was adopted as a puppy. His pretty eyes and big ears made it impossible to leave him at the shelter. Tucker is the energizer bunny, you can walk him for 4 miles, bring him home and he still wants to run and play. This energy hasn’t always been his friend… while wrestling with his new sister, she jumped on him and he broke his leg. He didn’t let the huge cast slow him down. Six years later, he still is as active as ever…clumsy too. Somehow he cut his tail and he couldn’t stop wagging it long enough for it to heal. As soon as it looked like it was improving, he would whack it off of something else and split it back open. It got to the point where he needed surgery to cut a few inches off. Still to this day, he can’t seem to stop his tail from wagging uncontrollably. Tucker is very high energy and very anxious. It takes awhile to convince him to sit still or relax and he is always worried that he might miss out on some of the action. He always has a toy hanging from his mouth… it seems to serve as his security blanket. He loves catching ball, but struggles with the concept of bringing it back.  He is happiest riding in the car, chewing on bones, running around and playing. He is quite known to pick on his sister and will whack her in the face when she is minding her own business… no worries, she always retaliates. He is less motivated by food and easily distracted. While it is very rare to hear him bark, he is very well known for talking. He whines and huffs and puffs and grumbles like an old man when he doesn’t get his way or wants your attention. He also suffers from “selective hearing” even with his enormous ears.

We are looking to find a new home where they can stay together. They both take Prozac daily to help with their anxiety and high energy. In the right home, with room to run/play and enough exercise, we believe they could be taken off of Prozac.

So why do they need a new home? Up until recently, the dogs were able to go to a relative’s house during the day, but that relative is no longer physically able to watch them anymore. My allergies prevent them from having access to the majority of the house.  They have limited access to the game room which has to be vacuumed daily to keep the allergens at a minimum.  With the loss of day time care and my inability to be around them, my boyfriend has ended up being their sole caregiver.  The dogs end up spending the majority of their days in “their room” aka part of the garage. Their lifestyle has changed drastically and it is to the point where it isn’t really fair to anybody to keep them. They don’t get the time, exercise or attention that they need and we haven’t been able to find a way to make my allergies tolerable with them in the house.

If you can help Olivia and Tucker find a new home, please contact Katie at OliviaandTucker@gmail.com.

“We adopted a Ross dog from Animal Friends, and they gave us with our dog’s history and provided behavioral support after adoption!”