Jules the Cat: A Rescue Story

Posted on August 1, 2012
By Jeff Geissler, Communications Assistant
For a feral cat colony caretaker, a routine case of TNR – Trap, Neuter and Release – turned into a lifesaving mission.
Sarah McKean, a board member at Animal Friends, cares for two feral cat colonies in the Pittsburgh area. Not only does she feed the cats, but she makes sure each cat is vaccinated and spayed or neutered.
Jules, a 5-year-old orange tabby, showed up at a feral colony near downtown Pittsburgh last fall. He meowed and kept a safe distance, but never fled when Sarah visited. Feral cats tend to be silent and extremely skittish when a person approaches. Jules did not act like a feral cat, leading Sarah to believe he had lived with people and had not been homeless long enough to become feral.
He wasn’t neutered so Sarah set out to catch him. But trapping the elusive Jules proved impossible – he was too fast and smart. Then winter came and Jules disappeared.
About six weeks ago the orange tabby returned, but he did not look well. His half-closed eyes looked empty and hopeless. His mouth looked slightly distorted and injured and his fur was dingy and matted. Also, Sarah smelled the painful stench of infection from within just a few feet from the feline. 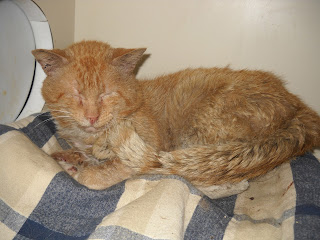 For Sarah, Jules became a catch-and-rescue mission. She tried traps again and attempted to lure him close with treats in the hopes of grabbing him but neither worked.
Finally, a few weeks ago, Sarah placed food in a dog crate near the colony. She drove her car about 50 feet away then carefully and quietly walked to the crate where she quickly snapped the door shut with Jules inside.
The medical staff here at Animal Friends quickly discovered a huge ulcer on his tongue which made eating and cleaning himself extremely painful. He was also covered in so much grease and oil that he’s had four baths so far and still isn’t completely clean. We think he lived in abandoned car.
Today he’s resting in our cat recovery room, where he’s healing under the careful eye of everyone at the shelter. Soon, Jules will be available for adoption. 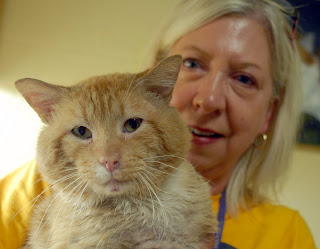 “I really think he wanted me to rescue him. He knew his time was running out,” Sarah said.
To help Jules and other cats like him, donate today. Jules’ medical care costs are covered by caring individuals like you!  Click here to donate now.
This entry was posted in By Jeff Geissler, cat, feral cats, jules, rescue, TNR. Bookmark the permalink.

“This is the most awesome shelter I've ever dealt with. The staff are so caring and kind. The educational programs are amazing”