Linda Dickerson is a superb marketing professional and fundraiser who finds unique ways to support charities throughout the region. She is also well known for her talents and charitable work.  So it’s no surprise her dog, Minne (named for the city of Minneapolis) takes after her! Minne, age 3, is a Bichon Frise and is no stranger to helping those in need.  Minne even raises money for charities from his birthday parties!

This year, Linda and Minne raised money for Animal Friends’ Bark in the Dark event. They launched a unique and fun campaign to be the top fundraisers: “Minne For Mayor”.

While Minne is not actually running for government office, Ms. Dickerson crafted the campaign in hopes that Minne could be the top fundraiser for the Aug. 24 Animal Friends event, Bark In The Dark. Everywhere that she and Minne went, they passed out Minne for Mayor buttons and asked people to support the dog with donations to Bark in the Dark for Animal Friends. 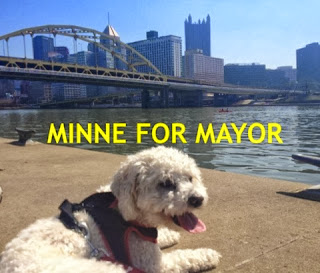 “Minne is delighted to raise money for all of his furry friends who aren’t as lucky as he and who don’t have furever homes,” said Linda.

Through the support of friends, family and supporters of Minne and Animal Friends, they secured the top fundraiser spot. Next year, Minne will be the Bark in the Dark coverdog — on the brochure, posters and T-shirts at next year’s event.

While Bark in the Dark isn’t for another year, you can support Animal Friends today by donating at www.ThinkingOutsideTheCage.org/DonateNow or become a volunteer.  And don’t forget to keep an eye out for Minne!

This entry was posted in Bark in the Dark, contest, dog, fundraise, fundraiser, minne, winner. Bookmark the permalink.

“Animal friends is the best! I got my sweet girl Aspen there and the staff was so friendly and helpful.”