Mr. Whiskers – Home for the Holidays

Mr. Whiskers – Home for the Holidays A pair of bright green eyes stares through the kennel bars.

Mr. Whiskers is watching one of his closest friends pulling out feather toys and teaser wands. As soon as he hears her get to the treats, his meows become louder and more frequent. “I’m hurrying. I’m hurrying,” she chuckles to herself.

Once all of his favorite toys are laid out, she slowly opens his kennel door. She offers the back of her hand, and it’s met with a gentle headbutt. “There’s my boyfriend.” She opens her palm and he tilts his head into it. She gives him a treat and then scratches under his chin.

If you were witness to this bond you’d never guess that when Mr. Whiskers first arrived he was terrified of people.

Early in the summer, we received a call. A woman had too many cats – 31 to be exact – and was being evicted. Taking in one pregnant stray quickly spiraled out of control. Now there were nearly three dozen fearful, undersocialized felines who would soon be on the street. She was out of options … so she turned to Animal Friends.

The scene was heartbreaking. The cats … they were everywhere. Peering back at us with huge eyes they flattened themselves against walls, behind furniture and anything else in an attempt to disappear. The house was nearly unlivable. Heaps of trash. Soiled carpets. Torn furniture. Sadly, we’re no stranger to situations like these. And, no matter how many times we see it, it never gets easier.

But that never deters us. We rolled up our sleeves, and got to work. It took several weeks and numerous visits, but finally each and every cat made their way to Animal Friends.

As soon as they entered our doors, the cats became part of our compassionate network of care. Vaccines were administered. Spay and neuter surgeries scheduled. Treatment began for those who were suffering from upper respiratory infections.

But it wasn’t their health that was the most worrisome – they were terrified of people. It was clear some of the cats received more socialization than others. A handful of them would hide when their kennels doors were opened. With patience – and some tasty treats – they could be coaxed from the solace of their beds.

But for others, simply approaching their kennels was too much. Our coos of affection were met with hisses and growls out of fear.

We refused to give up.

We soon saw that the felines who could be worked with outside of their kennels were making the most progress.

So, our Behavior team thought outside of the cage and retrofitted our Grooming Room into a homelike environment. While it would take time and patience, this was a critical step in their rehabilitation.

Every day, we took turns going into the room. We spent countless hours reading to them, even checking emails and finishing up paperwork. We simply spent time with them so they could begin to acclimate to our presence. As we started to see them come out of their shells – leaving a hiding place, reciprocating eye blinks, touching noses to fingertips – they were given treats, praise and lots of love.

We were determined to show that interacting with people was a positive experience. 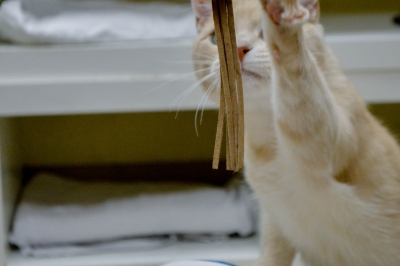 And, after months of patience and determination, the once-dormant room was coming to life. Paws reached for toys from under blankets. Unscathed scratching posts were earning their claw marks. And, eventually, vacant laps were an open invitation for naps.

Even the carriers that they once took much coercing to get into became a favorite spot for napping. And, Mr. Whiskers, well, he’s doing just fine. He’s even learned how to high five (yes, cats can learn to high five!).

A seemingly cute parlor trick, Mr. Whiskers learned through clicker training. This training methodology is a proven valuable tool. It teaches shy and fearful animals yet another way to associate human interaction with a positive outcome.

“There you go gorgeous boy,” as he gently raises his paw to connect with her hand. He’s promptly rewarded with a click and some much-coveted tuna. With each passing click, you can see their bond strengthening … and his fear of people melting away. 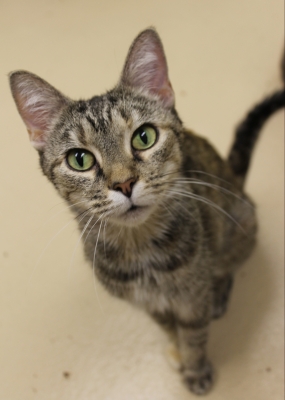 Weeks turned into months and the cats were truly starting to thrive. Now, guests cannot cross the door’s threshold without being met with an affectionate swarm of soft mews and affectionate kitties at their feet.

Rescuing and rehabilitating animals like Mr. Whiskers takes a lot of time, energy and resources. And, no matter how long it takes or what it costs, we know it is worth every second … and every dollar.

Mr. Whiskers is just one of thousands of animals who come to Animal Friends to find a new home. A home with warmth and security. A home with love and affection. A home for the holidays.

But we can’t do it without you.

Without you, we couldn’t provide thousands upon thousands of hours of individualized behavioral care to the homeless dogs, cats and rabbits who fill our kennels.

Please consider a gift in support of our work. You will ensure that extra socialization, behavior modification and specialized training will be given to pets in need.

So please, you can help all of our animals find a home for the holidays.

“Awesome staff – they take great care of the animals and go above and beyond for veterans.”