Animal Friends is pleased to announce a successful close to the 2015 Summer Camp season. We held our biggest season yet – 15 sessions over 8 weeks. A big thank you to our campers – our animals, staff, and volunteers enjoyed having you here!

Critter Camp
Over the course of four weeks, 32 kindergarten and first graders joined our camp teachers, Ms. Ashley Phoenix and Ms. Kelly Miller, and adult and teen volunteers for a three-day camp to learn about and tour our shelter, meet many animals, and create crafts for the bunnies, rabbits, and dogs to enjoy. The camp followed a three-day themed schedule including Bunny Day, Cat Day, and Dog Day. 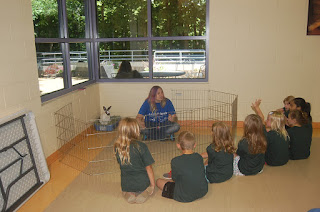 Kerri Nevills, an Animal Friends volunteer and foster parent for rabbits, has been a guest speaker at Critter Camp for many years now. Kerri comes to talk to the campers about foster care and how to handle rabbits. This summer, Kerri brought in her own therapy bunny, Aubrey, along with her foster bunny for the children to meet and ask questions about. After meeting Kerri’s rabbits, the campers were given a healthy snack plate that included a blueberry, a carrot slice, and parsley to feed to the rabbits currently living at the shelter. For all the rabbits that didn’t get a snack, the kids made a small treat bag, filled with timothy hay, that they got to watch the bunnies open and eat. 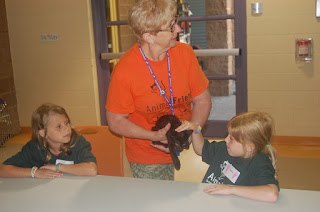 At each Critter Camp session, the children were able to meet several foster kittens around the age of 8-10 weeks old that were brought to the shelter by their foster moms, volunteers Diane Friske and Jewell Jackson. Afterwards, the campers divided into two separate cat viewing rooms to take turns meeting and playing with two kittens living at the shelter during their camp session. The campers then made two different crafts including a ghost cuddle toy and a fringed toilet paper roll for all the older cats living at the shelter to play with. 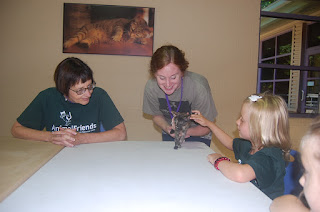 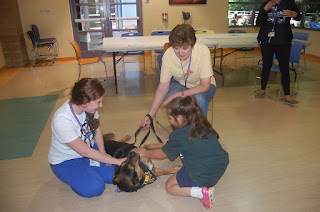 Each camp session ended with Dog Day. The day began with the campers making homemade biscuits for the dogs living at the shelter. While the treats were baking, Barb Gesmond, an Animal Friends Therapets volunteer, brought in her therapy dog Spartacus for the campers to meet and pet. Spartacus is a former Animal Friends resident, and he loved coming back to play with the campers. By the end of camp, Spartacus was so comfortable with the kids petting him, he began to immediately roll on his back to get his belly scratched. The shelter also had several litters of puppies living at the shelter over the course of our summer session. Using gentle petting techniques, the kids got to take turns petting the puppies that were brought into the classroom by dog handling volunteers. For the remaining dogs living at the shelter, the campers got to walk by the cages feeding each dog the finished biscuits they made earlier that day. 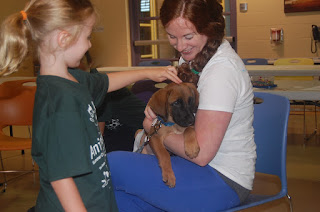 Our teachers and volunteers had such a great time at Critter Camp this summer. We had several campers that had returned from last year, and we look forward to seeing all of our campers again next year!

Critter Camp is one of four Animal Friends camp options, based on the grade that the student has completed the prior spring. You can find more Critter Camp photos and those from our grades 2-11 camps posted on Animal Friends’ Facebook page.

Details about 2016 summer camp will be posted in February at www.ThinkingOutsideTheCage.org/camp, and registration opens in early March.