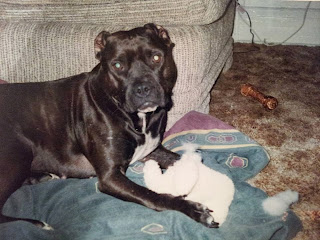 
I met Cindy Lou when I volunteered at Animal Friends in Pittsburgh years ago. At first she was not eligible for adoption because she was being held for court. When I adopted her about a year later, Animal Friends estimated her age to be about 4 or 5 years old. I didn’t ask any details about her abuse because a big part of me was afraid to hear it. I knew this much: She had been used to fight. She had many, many battle scars, most in the front from her face down to her front paws. She had one on her shoulder that looked suspiciously like a cigar burn and a fracture in her foot that had never properly healed so it looked like a lump. Her foot was also deformed and facing to the side. The flaps of her ears had been torn off. It was obvious she had been bred too.

I was intimidated to take on a dog with such a past but we bonded right away. She was pure muscle when I got her but very afraid of everything and everyone. She enjoyed taking car rides but would begin to shake as soon as the car parked. I imagined the only place she probably went in a vehicle was to fight. If you told her “no” she would begin to shake very badly and I would then have to ensure her that it was ok and there was not further punishment. 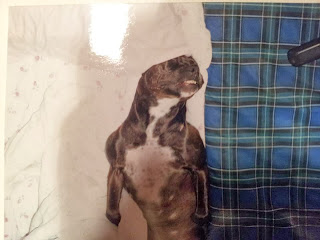 She was afraid to walk past houses. We lived on a street where there were some empty lots between our house and the next so she would happily walk the length of the empty land but would stop before reaching the house. One day I took her to a park and she was in heaven. She loved looking for trails to walk in the woods. Whenever we would approach another dog on a leash, Cindy Lou would become upset. She would stop in her tracks and want to go back the way we came to avoid the dog. I would make her stay in place and once the dog passed without incident; she would then begin to wag her tail and want to follow the dog as if she wanted to make friends. Once, a neighbor boy brought his Great Dane to our house while we were in the driveway washing cars. I put Cindy Lou in the car as a precaution and allowed the dog to approach the window. When he did, Cindy Lou began to show her teeth at the dog. I told Cindy Lou “no” and as usual she began to shake and I told her it was ok. She then sniffed the dog and became friends. I realized then that she didn’t “want” to be vicious; in the past it had been expected of her. 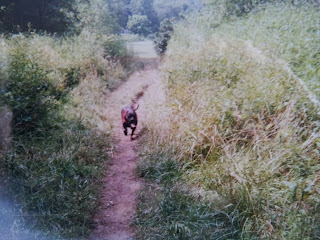 I had Cindy Lou for the 5 remaining years of her life. She was a sweet, kind, gentle, loving dog that made me fall in love with the Pit Bull breed.  She was so smart. She seemed to have this magical affect on people, especially my ex-husband and myself. Cindy Lou was terrified of men but I knew that if she could warm up to any man, it would be my ex-husband. He tried to talk me out of getting her because he was afraid but she quickly won him over and the two fell in love with each other. Cindy Lou became very spoiled. Whenever I would look at Cindy Lou’s face and want to attack it with a hundred kisses, I just could not comprehend how someone else would look at that same face and do cruel things to her. To this day the thought brings me to tears.

It is 10 years since she is gone and I still miss her so much. I wanted to share Cindy Lou’s story because I know there are others like her. Michael Vick’s dogs were assessed by professionals and though some were deemed too vicious, some have gone on to become very valuable and loving members of families. Over time, Cindy Lou’s fur grew, covering most of the scars. Though her emotional scars remained more obvious, she became more relaxed and trusting of us with time. We knew she would never be like a normal dog but I found great satisfaction in the little strides that she would make. A rescue dog (even one with a scary past) can make a great pet. People used to say to me that Cindy Lou was lucky to have me and I used to say no, I’m lucky to have her. Cindy Lou brought great joy to our lives and I will always be grateful to her for it.

And I have Animal Friends to thank for bringing her into my life.

“We adopted Nico after the meet and greet went well with the family! Everyone here was so helpful and kind!”