Thanks to Linda Mitzel and our Photography Volunteers

Posted on July 25, 2012
Volunteers are the backbone of Animal Friends.  Without their tireless efforts, dogs would go un-walked, cats would not be played with and there would be many bored bunnies sitting in cages.  Volunteers work in all capacities at Animal Friends.  Some walk dogs, some help with special events, some make phone calls and some organize bake sales.  Still others help with behavior evaluations, write biographies for the animal’s kennels and make sure that each and every animal gets the care it deserves and the love it needs.
One special group of volunteers makes sure that our dogs receive professional portraits every week. Every Monday, Linda Mitzel and her staff of helpers open their studio to our homeless dogs. These professional pictures are then used for the animalss informational write-ups and kennel cards and also for other promotional materials.
These visits are made possible by a group of Animal Friends volunteers who help our dogs make the trip by chauffeuring them each week. In addition to great photos, great memories are made during these trips.  One volunteer, Karen Drosendahl, remembers previous long-time resident Jeannie’s photo shoot.  “Jeannie had a ball!  She got to the studio and took a long look at the steep stairs to go to the studio,” Karen said.  “She turned around and went up backwards, butt first!  That was a very Jeannie way to do it.” 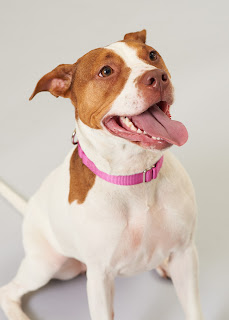 The trips to the studio serve a double purpose: the dogs get a professional photo of them to look their best for potential adopters and they also get a break from being in their kennels.  Volunteer Sharon Mariani took this opportunity to take Augustus, a 9-year-old Miniature Pinscher, for ice cream. 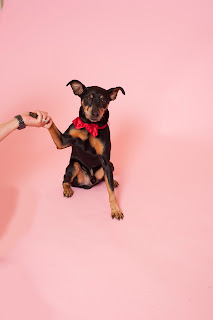 “While we were at the window waiting, all the workers inside came to see him and say hello.  They thought he was so cute,” Sharon said.  “We sat outside to eat and halfway through his treat, he stopped eating and with vanilla ice cream all over his snout, he looked up and me and dramatically squinted.  It was like he was winking at me and saying, ‘thank you!’.”
Linda Parnell used her trips to the studio as an opportunity to take a bit of a drive.  “Lizzie Marie is a sweetheart of a dog and she was more than happy to get out for awhile,” Linda said.  On their way to Linda’s truck, Lizzie spotted a tennis ball in the play yard and took it with her.  “We don’t normally allow dogs in the front seat but I broke the rules for Lizzie and she was a perfect lady!  She sat very quietly and watched intently out the window.  I took the long way back to Animal Friends so Lizzie could have more time in the car.”  Lizzie’s photos were very cute and we’re sure they helped her get adopted a few days later. 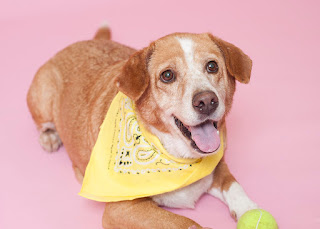 Trips to the photo studio are also a chance for a shy, timid dog to overcome fears of people and new places.  Anita DeBiase recalls Sunny, a very frightened and fearful dog that did not like being touched in any way.  Sunny’s former vet and groomer said she would never be adoptable and recommended she be put down. “She growled and snapped whenever someone would approach her.  I am proud to say that myself and a dedicated group of volunteers worked with her to overcome her issues,” Anita said. 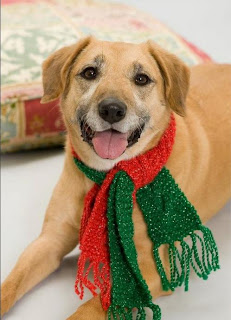 “She was the first dog I ever took to the studio and it was a great accomplishment.  She went and was photographed in her Christmas scarf,” Anita said.  A short time after her shoot, Sunny was adopted by an older gentleman who fell in love with her sweet spirit.
Elaine Natowich and Kay Yetter had the most fun spending the studio time with Virgil, Robert Downey, Mazey, and Braden. 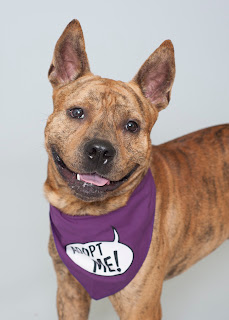 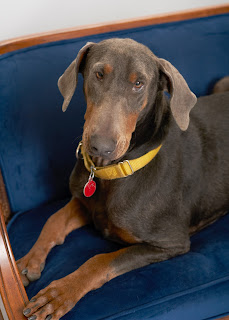 Debbie Viducich recalls Janeway, a Boxer mix with an adorable under bite.  “We fostered her for over four months shortly after she arrived at Animal Friends.  She has the ability to light up the room with her cuteness and funny, happy personality and it is great to see people’s reactions upon meeting her for the first time.” 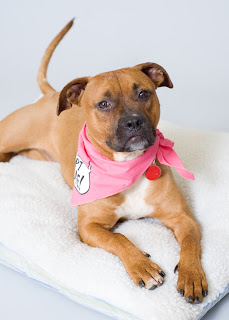 This dedicated group of people help our dogs week after week to ensure that as many dogs as possible get their photos taken.  From the bottom of our paws, to the tops of our ears, thank you very much to Linda Mitzel and our photography volunteers!
This entry was posted in adoption, linda mitzel, one million hours, volunteer, volunteering, volunteers. Bookmark the permalink.