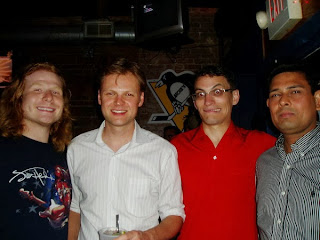 By Kayla Seifert, Animal Friends Development Assistant
Every year, Animal Friends is privileged to be the beneficiary of dozens of Third Party Events. These types of events are held by individuals and businesses outside of the Animal Friends’ organization that simply believe in our mission and want to hold a fundraiser to benefit our organization. These events vary greatly, consisting of everything from lemonade stands, jeans days at work, golf outings, and even our partnership with Hundred Acres Manor.
A few weeks ago, Duquesne Law student Brendan Makarewicz decided to hold a third party event for Animal Friends. Influenced by his love of animals and his belief in the good work of Animal Friends, he planned and coordinated the Southside Bar Crawl.
Bar Crawls are fun and unique events. The Event Coordinator approaches and asks if they would like to participate in the bar crawl. Patrons of the bar, then, can pay an admission fee to participate. The event holder can even find sponsors for their event to raise more money. In the end, a portion of all of these proceeds go to the cause the bar crawl is fundraising for.

Though the planning of a fundraiser of this size is often more work than meets the eye, Brendan was quite successful. He managed to recruit 13 bars on Carson Street to participate, including Double Wide Grille, which welcomes dogs on their patio. He also received a sponsorship from Miller Lite for the event. Brendan worked with Animal Friends to get the word out to the Animal Friends’ community through our website, Facebook page, and e-blasts. He also promoted the event at Duquesne University and set up a Youcaring webpage. Brendan even coordinated with CARMAA to promote his event at Dogtoberfest, an event they were holding downtown earlier the same day.
Animal Friends’ volunteers attended the Bar Crawl, along with one of our adoptable pups, to pass out flyers and spread the word about our programs and services. By doing this, not only did Animal Friends help bring in more participants, but we also were able to tell the public about our organization and give an adoptable dog a break from the kennel. It’s certainly a win-win situation! 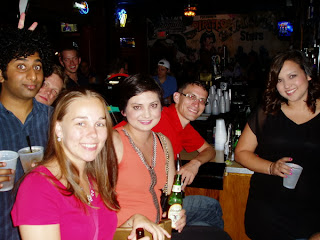 Though the weather was slightly rainy, the Southside Bar Crawl was a great success and brought in donations that will be used to further the mission of the organization. Brendan said that while hosting an event of this size was quite an undertaking, helping all of the animals in need was definitely worth the work.
Animal Friends greatly appreciates all of the hard work that Brendan and all of our other Third Party Event holders, put into their fundraisers. These events are a great way for individuals and businesses alike to contribute to Animal Friends, both in holding these events and though attending the events as participants.
If you would like to hold a Third Party Event of your own, you can fill out the Third Party Proposal Form on our website: https://www.thinkingoutsidethecage.org/site/c.elKWIeOUIhJ6H/b.8601859/k.9D3D/Third_Party_Event_Proposal/apps/fc/form.aspor email kseifert@thinkingoutsidethecage.org.
This entry was posted in bar crawl, event, fundraise, fundraiser, money, third party. Bookmark the permalink.