Everyone needs a friend to be by their side and animals are no different. Sometimes pets come to Animal Friends with their best friend and we call these duos bonded pairs. They are housed together during their time at Animal Friends and are required to be adopted by the same family. 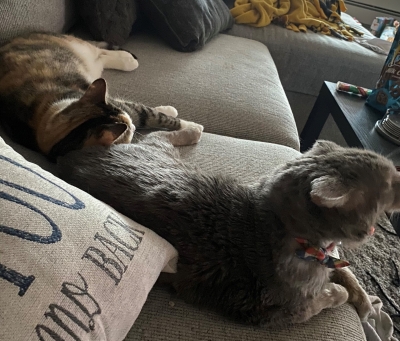 Last September, we welcomed a unique bonded pair of felines who were transferred from a partner organization. Hercules was the confident and charismatic senior cat at 10 years old and his other half was Calliope, a timid 2-year-old calico. Both cats were FIV+ which impacts their immune systems, but does not prevent them from having long and healthy lives.

Upon arriving, our Medical team realized that Hercules needed to have some dental work performed before he could be adopted. While they waited for Hercules to have his procedure, both cats quickly became favorites among our staff and volunteers with their sweet personalities and deep affection for one another. 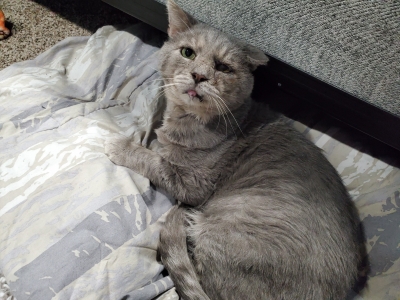 After Hercules had his dental procedure, the duo spent some time in a foster home so he could recover comfortably. And shortly after that, they were ready to find their new family! In early December, our Adoption team was contacted by a lovely young couple who was interested in meeting Hercules and Calliope. And, it only took a matter of minutes for them to let their personalities shine, stealing the hearts of their family.

Since their adoption, we’ve received many updates that both Hercules and Calliope are adjusting very well in their new home. On the first night Calliope was a little nervous, but Hercules always being the brave one, showed her the ropes and helped her settle in. Over the past few months, they have enjoyed passing the days with snuggle time, playing with toys and enjoying all of the love and attention their new family has to give. They are known to play late into the night but always find a comfy place to snooze in the end. 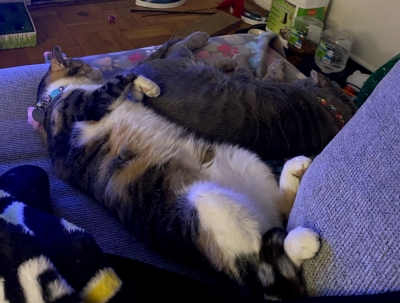 Hercules and Calliope had quite the journey in finding their new home, from traveling through different shelters, to having dental surgery and spending time in a loving foster home. But, it was all worth it to find the right family who is dedicated to their health and happiness. Congratulations, Hercules and Calliope and Happy Tails!