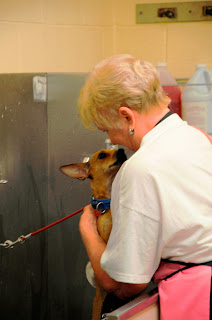 On Tuesday, July 9, Animal Friends will hold the 16th annual “Liberation Day Rescue” to offer a second chance to lost and unclaimed dogs who are slated to be euthanized at animal control facilities.

Because of loud noises and outdoor activities, more dogs are lost around the Fourth of July than any other time of year. Those who are not claimed from animal control facilities are euthanized.

Animal Friends’ goal is to rescue as many as possible and remind the public that simple measures–tagging, licensing and microchipping–can help keep your dog safe.

On July 9, rescued dogs will be named, vaccinated, bathed and groomed at Animal Friends.

In honor of Animal Friends’ 70th anniversary, each of the rescued dogs will be given a 70’s-themed name. (Think: lava lamps and disco balls!)

Pending any necessary evaluation, the dogs will be spayed or neutered and readied for adoption into loving families beginning July 15.

“I'm glad that we got our kittens from a place that loves animals as much as we do. Thank you!”